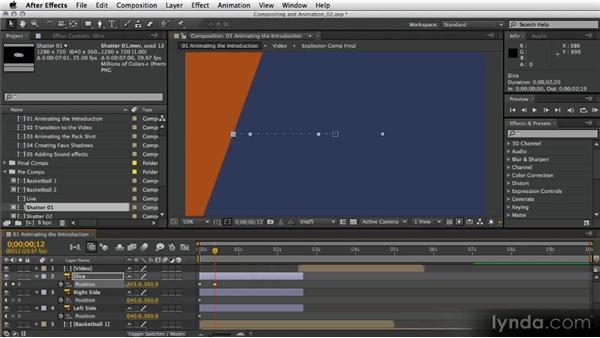 In this movie, we'll establish the opening shot with Quick Upbeat animation. that matches the music. I'm inside the After Effect project named Compositing and Animation_2, which you can find in the fourth folder of the footage and project files. In this project you will find, among other things, two folders which I've already repaired for you. The first one will be the Begin Comps, which we'll use in order to start each stage.

And you will also find the final composition folder, that will have the final versions of each step that we'll take. And this will allow to compare your results to mine. OK, so let's Close this one, and Open up 01 Animating the Introduction. What we have here, is the state that we left this composition, after Importing our Illustrator document design. So I'm just going to go to the beginning and create quickly a Run Preview so, we'll understand what is the starting point of this? (music playing) So we see that, indeed nothing really happening on the first two and a half seconds, then we have our rendered video composition, and then we have the final pack shot.

So, what we want to do is to create an establishing shot, meaning that we want to open these doors, and we also want to time it to the cue, to the beat of the sound. First, let's start with the slice, just to remind you the slice is just the orange piece here. I'm going to Open up the Properties for it. And under Transform, I'm going to Animate the position. And by the way, if you want to quickly get to the position Property, you can just type down P, and After Effects will display only the position value for you.

Of course, each one of the Transformed Properties has its own shortcuts, and I will give you those shortcuts when we need them. But if we are talking about efficiency, let's be even more efficient, and create the keyframe for the position in one go. Meaning that instead of pressing on the P letter at the keyboard, and then set up the position keyframe, which is OK, you can do it in one take. If you're working on a PC, you have to press on Shift+Alt and P, and if you're working on a Mac you can just choose Alt+P, and this will create a keyframe at the place where the play head is in.

So this is the first keyframe for this slice, and let's do the same for the right side and the left side. We'll do it together by holding down Shift and selecting both layers, and then press Alt+P or Alt+Shift+P if you are working on a PC, and create our first key frame. Now, we want to match the movement to the cue of the sound. So I'm going to hold down Cmd or Ctrl and then Drag my cursor here, so I will be able to hear where the first cue is actually happening, (music playing) OK, so I think that this is the correct place, so 12 frames in this instance.

Now let's return to the Slice Layer, and then just Drag it all the way outside of the frame. Now in my case, I ran out of room, I reached the end of my screen. So I can either do it once again, or hold down Shift, and then it will increment ten times faster. So I'm just going to Drag it until it won't be visible over here. And I'm going to do the same for the right side, of course, this one should go to the right. So, I'm holding down Shift, and then quickly just pulling it on the x-axis, away from us.

And then, we're going to do the same for the left side once again, holding down Shift, and moving it away from the screen. Now, let's go to the beginning, and just look at the little animation that we've just created. (audio playing) Okay, do you start to feel the excitement? I'm sure you do. Now, this is very nice. It works beautiful with the sound. We can collapse those Layers now.

And let's give the basketball itself, some kind of movement. We actually want to start by making it a little bit bigger at the beginning, meaning closer to us, and then move it away, until it basically will match the basketball in the video frame, and then we will create a transition. But for now, let's try to match it using our eyes. So, let's go to the beginning of this Layer by pressing I, and this will take you to the In of the Layer. Now, let's use, once again, the same keyboard shortcut that we learned, this time for the Scale Value.

So, instead of just pressing on the S, this is what the S will show you, I'm going to hold down Alt or Alt+Shift and press on the S, and this will create a keyframe at this spot. Now we can't really see what we're doing, since the slices on top are blocking it, so let's just solo it for one moment here, and maybe, change it to I guess 90%. Now, let's go here, because actually, we want to do the animation, not through the whole thing, just to match the basketball, and this is where the basketball should be visible on the screen.

So I'm just going to start guessing, so maybe 50% here. And them I'm going to solo the video for a moment, select it and press T, and reduce the Opacity to maybe 50%, so, I'll have a chance to see both of them, one on top of the other. Now I'm going to grab the video, and just try to match it to what I have on screen. So something like this.

And just using the Arrows, you can find out what will be the correct value. You know what? In this case, I think that 50 is a good number. All right, so now that we know the basketball is in its place, or actually the video is in its place. And this is, by the way, the reason why I chose to leave the video on its full HD size, meaning 1920 by 1080. So, I'll have enough space, enough meat, enough room to work with.

All right, so let's set it back to 100%. I'm going to also turn the Solo Switch back. And I'm going to select the word Scale and press F9. In order to easy ease those keyframes. And this is the first part of the animation. It almost done. I just want to maybe Close it, just to make sure that I know that this is where it ends. I'm also going to trim it down, then dismiss the solo. Then let's go to the beginning once again, and I just want to create a little bit of a Shadow of a depth between the Slices, between the Layers here.

I'm going to Apply it just for the Orange slice, using a Layer Style. So make sure it's selected, and then go under Layer, and under Layer Styles, let's add the Dark Shadow layer style. Then Open it up, and basically I just want to play with the size here. So, let's just make it very, very visible, maybe 90 pixels. And I think that's it for the moment. Let's create the Run Preview, to check the results.

(music playing) Excellent it looks good, works well with the beat, and that's it for the introduction.