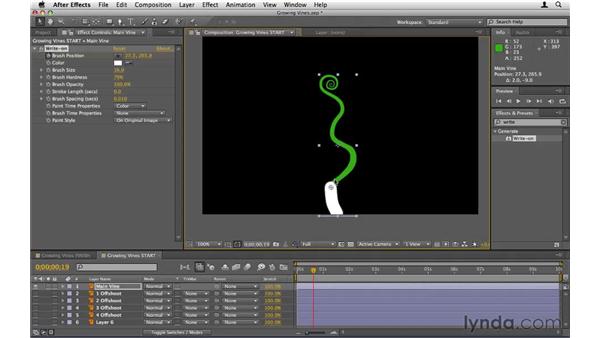 Join Chad Perkins for an in-depth discussion in this video Animating growing vines, part of After Effects CS5 Essential Training.

One of the most common uses for After Effects' Paint arsenal is to create these cool growing vines, this type of effect, sometimes you'll see it with vines or ink spatter or whatever, but basically the effect is done pretty much the same way. It's really a beautiful ornate effect, and it's not super hard, although it is little time-consuming. So, here's what we're going to do. We have one vine, because actually in the final result, one of the things that makes this look a lot more ornate and beautiful than it really is is you animate one vine and you just duplicate it a bunch of times.

Again, it is time-consuming, so we're not going to go through this whole entire project. It probably take a good, I don't know, 30 minutes or so, maybe longer to do this. But you'll get the idea of how to do this on your own. Actually, I'm going to take up the visibility of that bottom layer as well. So, we're just going to select the Main Vine and we're actually going to use a painting feature of After Effects that we haven't covered so far and that is an effect called Write-on, with a W. So, I'm going to apply Write-on to this vine and first you'll see this Brush Position value. So, I'm going to click the effect control point for this and then click right at the bottom of this effect.

By default, the Brush Size is a very tiny two pixels. So, click and drag this to the right to resize this stroke so you could see this value. There we have our paint and make sure you're at the first frame. What we're going to do is click the value for Brush Position,and we're going to move in time a little bit and then move Brush Position a little bit. Again, you want to make sure that the stopwatch is clicked for Brush Position. Otherwise you will not actually be creating a long paint stroke; you'll just be moving one little paint dot around.

So, again, the key is to move in time and continue to paint this entire vine. Now the paint here works kind of like the Brush tool that we saw before. Where we're now painting with this color on top of our layer. So, the key to this trick really is in this Paint Style dropdown at the bottom. So, right now, we're painting On the Original Image. That's the default setting. You could also paint On Transparent, which is what we saw with the paint settings as well, where we could get rid of the layer and just have our paint. But what makes this effect unique and special is this value down at the bottom, and that is Reveal Original Image.

That will make it so it doesn't matter what the color of the Write-on paint is. You'll actually be using the paint to reveal the image. So, basically what you would be doing is be moving in time, changing the value, and revealing the vine that is there. Now, one of the things that you'll want to do-- and I want to take Paint Style back to On Original Image for a moment. We need to change Brush Time Properties from None to Size. The reason why is that we're going to need to animate the size of the brush. As we go up this vine, you'll notice that it gets smaller and more treacherous, like a mountain road.

And then at the top, it curls. It gets very small. So, we're going to want to be able to animate Brush Size. However by default, Brush Size, when you animate it, and let's say I take this down is going to change the brush size for the entire stroke for everything that we've drawn so far. But actually we don't want that. We want this to be big and then to taper and get smaller towards the end. So, the way that this happens is by changing Brush Time Properties to Size so that as we move in time, as we continue to change the value, and then we animate Brush Size. Actually let me back up and we'll start there. Click the stopwatch for Brush Size and then I move in time.

Now, because I've animated both Brush Size and I've changed Brush Time Properties to Size, then when I change the Brush Size it only changes the current spot's brush size and not the brush size of the entire stroke of everything that we've done. So, that is essentially the trick. We paint on the entire vine and then we change the Paint Style to Reveal Original Image, so that we are uncovering whatever we want to reveal, and then we do that to each of these vines and then we duplicate that whole vine. Now you can see that I did that via pre-composing.

So, if I double-click this, you could see my vines are all animated here. Here's what that looks like. Then I duplicated those precomps, added some Glow, scaled them, flipped them a little bit, changed them so they staggered in time a little bit, and then put them together, and you have this really beautiful vine animation.

4/30/2010
In After Effects CS5 Essential Training, author Chad Perkins discusses the basic tools, effects, and need-to-know techniques in Adobe After Effects CS5, the professional standard for motion graphics, compositing, and visual effects for video. The course provides an overview of the entire workflow, from import to export, as well as detailed coverage of each stage, including animating text and artwork, adding effects to compositions, working in 3D, and rendering and compressing footage. Exercise files are included with the course.
Topics include:

A: To create a blob layer, make a shape layer using the Pen tool. Animate the anchor points over time to make it move. These concepts are reviewed in depth in Chapter 4, "Learning to Animate."

Q: In the Chapter 5 video "Understanding precomposing," the exercise file provided does not seem to match up with the file the instructor uses. My file does not include a "Biker Body" layer. Is there an error in the exercise file?

A: Unfortunately, the exercise file originally distributed for this chapter was incorrect. A new file was issued in February 2011. If you downloaded the exercise files prior to then, you can download the corrected file on the Exercise Files tab of the course page.