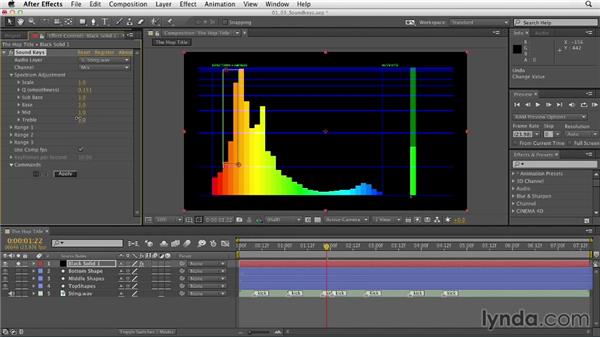 One of the best third party effects for animating graphics to audio is Soundkeys. It's made by Red Giant and it's a part of the trap code suite. That's what we're going to use to animate the appearance of these different shape layers in our project. So let's get started by creating a New Layer Solid make sure the cell in this are column sized, and then click OK. Now we can apply an audio effect. If we go to Effect, we can go to Trapcode, and in here we'll go to Sounds Keys. Now in order to tie audio to the sound keys, let's go to the Audio Layer and change the pull-down from None to our Sting wave, layer five. Now just so we're not distracted with whats going on in the scene let's enable Solo for our Sound Keys Layer.

Here you can see we have a very interesting chart. In order to see whats going on in that chart lets move our current time indicator down the timeline. And notice now we're actually getting a graphic representation of our sound file. To better understand how this works, let's load up a Ram preview. (SOUND). So when you have Sound Keys applied, It creates this graph.

And the graph gives you the ability to draw selections from the different sound frequencies of the file. So for example, I have this box over here, this box is actually a range selector. And if you look in the upper left corner and the lower right corner we have targets so we can click on. So we draw selections around specific areas of our frequencies. So let's go ahead and draw a selection around these dark orange bars.

This is where the majority of our kick-drum is actually happening. Now if you open up the spectrum adjustment settings inside of Sound Keys, you'll see a bunch of different options. The first two options that we need to really understand are scale and cue smoothness. If you increase the scale you're going to increase the frequency response of our sound keys effect, let's Undo that. If you increase the smoothness you're going to wrap more frequencies up into each one of these individual bars.

Which in essence smooths out the frequency response. If we drag back to the left it's going to isolate more individual frequencies and give you a more jagged response. Now the rest of the options here just allow you to control the response within specific sections of audio. For example if we wanted to increase the responsiveness to the treble, we could just Click and Drag on the treble and notice now that's increasing here in the bar. So, the base is on the left side, treble's on the right and then everything else is kind of in between. Sub-base all the way to the left, so, let's make sure we have our selection drawn around this orange area.

This is our kick drum. Now, this box is a range and it's range one, so let's open up the options for the range one. Notice here we have our targets, which are these control handles we've been dragging on. Now the fall off allows you to adjust the fall off from each key frame that gets recorded. Key frames are recorded when you click the Apply button. But before we click apply, we need to pay attention to some of the other options for our range here. If we look at Output Minimum/Maximum, let's click on the pull down. Notice we could specify whether an outputs values between 0 and 100 or 0 and 1 or 0 and 360.

So for example if we were driving the rotation of an object, we would want to choose 0 to 360. Since we're going to drive the Opacity of an object let's just make sure we have 0 to 100 chosen. Now if we go down to the Apply button and just click Apply, it's automatically going to generate key frames from our selection. Press U on your keyboard to open up the key frames that have been created. If you click on the word Output you can open your key frame editor and hear and actually see what's been created.

Now in order to drive animation what you need to do is tie this key frame to another parameter. So let's disable Solo, and select our Top Shapes Layer. If you press T on your keyboard it'll open Opacity. And let's close our Graph Editor for now, and hold down the Option key on the Mac, Alt on Windows. And then click on the stop watch. That'll enable an expression where we can click on the Pick Whip for that expression. Imported directly at our output one value, that way when we let go our expressions written.

So we can just click anywhere outside of that expression and now notice the opacity value is driven by the key frame value of our black solid. Let's turn off the visibility for our Sound Keys later and preview that animation that we've created. (MUSIC). Now I'll stop playback. As you can see, the brightness of the layer wasn't very bright. So we may want to go back to our sound keys and make an adjustment to the scale so these can pop a little bit more.

But now that you understand how Sound Keys works. Go ahead and make your own adjustments, so you can create the animation to your liking.

6/26/2013
Harmonize your motion graphics with music. This project-based course shows how to complete two mograph assignments, a bumper graphic and identity spot, and explains how to transition the tools and techniques to your own projects. Author Ian Robinson starts in Adobe After Effects with Trapcode Sound Keys—isolating frequencies and creating related keyframes that allow you to drive properties like the position, rotation, or even the hue of an object. Then learn traditional editing techniques to transform a 3D animation into multiple pieces for the bumper, and migrate to CINEMA 4D and use the Sound Effector to resolve the logo for the identity spot.
Topics include: