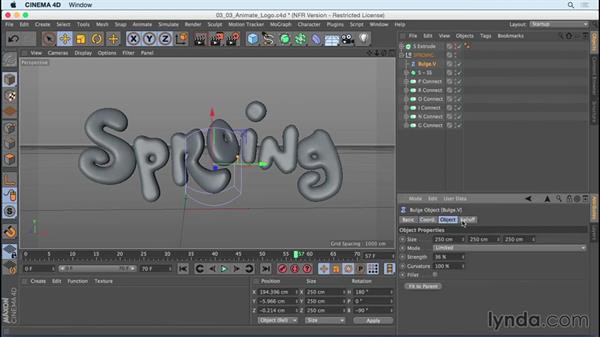 - With all of our letters individually animated,…it's time to position them,…and add another level of animation…to the entire word "Sproing" by using some more deformers.…So here we have all of our letters,…we all animated, and it's all laid out.…Let's play this out.…And we can go ahead and adjust the timing…or positioning and angles of the type to our taste.…So let's actually go to our timeline,…and for my taste, I think the "ing"…comes in a little bit too late.…You can even see the gap in our keyframes here.…

Let's just move up our letter "i"…and just kinda bring in both the "ing" letters…so it happens a little bit sooner.…Let's hit play.…And I'm liking that pacing a lot better.…And we can actually go in here…and kinda adjust and angle…some of these letters to taste as well.…So we get a little bit more depth,…'cause right now it's a little bit flat.…So let's go in and let's first select all…of our Jiggle deformers.…I'm gonna select one of the Jiggle deformers.…