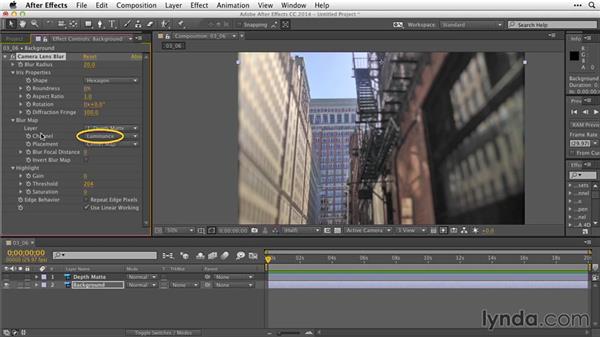 …Earlier in this title, we created a depth matte, or a black and white gradient that…we could use to actually animate a rack focus across an entire image.…So now it's time to animate.…So we'll start in Photoshop.…You can see I have my background layer.…And the layer above is my depth matte layer.…So the gradient is going to determine how the focus moves throughout the scene.…It's going to move from the dark area to the light area.…So all we need to do is go to After Effects and…double-click in the Project panel so we can start the import process.…

Now we get to the Chapter Three folder and choose 03_06_PSD and…import it as a composition retaining layer sizes.…We can click OK.…And then double-click on the composition to open it up.…We can leave the magnification set to 50%.…I'm just going to press the space bar, so…I can grab my hand tool and move it up in the scene.…To apply the blur, we can just select our background layer and…go up under Effect > Blur and choose Camera Lens Blur.…

Once we apply that blur, we can magnify the blur radius so…