Animating with the camera rig 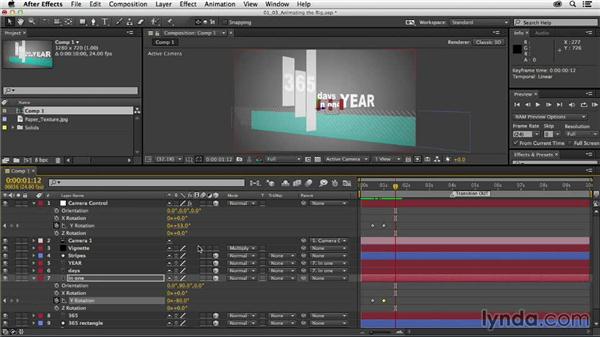 Join Ian Robinson for an in-depth discussion in this video Animating with the camera rig, part of Mograph Techniques: Dynamic Camera Movement.

Alright. Now is when we can get down to some nitty-gritty. Actually, animating our camera in 3D space. Now usually when I go through this process, I like to segment my animation into specific sections. That way I can more easily fine tune the animation, once we have the main motion already blocked out. Now, if we look in our time line you can see, I have a marker at four seconds, that's letting me know we need to be out of this comp at that point in time. Yes, all this extra area is just tail, in case we need it later in the animation.

So, to get started, let's actually reset our camera orientation on our camera control null. So select layer one and just change its Y orientation back to zero. This is where we'll actually start our animation. So, move the current time indicator to 12 frames. We'll work in 12-frame segments as we build this out. So I want to start by adding a keyframe on the Y rotation parameter for our camera control null. Now let's move down to one second. Just click and drag to the right and rotate the scene a little bit until you get an angle that you kind of like.

I'm going to rotate at around 53 degrees for my personal taste. Now, obviously the edge of the text is going outside of title safe here. So what I need to do is actually rotate this layer a little bit more. Now rather than rotating the camera, I'll just go down to Layer seven. This controls Layers five and six, so with Layer seven selected, let's press R to open up its rotation. Now I'm going to go ahead and collapse Layer four and just make my timeline a little larger.

And make sure my magnification is set to fit up to 100% so I can see the overall framing. Now on my timeline, I can see my previous keyframes. This makes it easier when I want to navigate up and down the timeline. So let's go ahead and add a keyframe for our Y-rotation. Now, I don't want this keyframe right here. What I'm going to do is click on it and then drag it to the left. And after I start dragging, I'm going to hold shift, and that way it will snap to right below this previous keyframe. Now, just click and drag to the left on the rotation parameter to rotate the text around.

Now, I think this looks pretty good. We'll rotate it to about negative 80. Now if you scrub through, you can see we have our initial move built. Obviously, we'll want to go back and ease these moves so things don't snap around so much, but like I said, we're just trying to focus on blocking out the animation. Now let's move our current time indicator to frame 112. Here, I want to rotate the entire scene to the right, so let's go back up to our camera control null, and scrub on the Z rotation.

This is exactly how I want to rotate things, so, I'll just Cmd+Z to undo this. And add a keyframe right here, frame 112, for the z rotation, we'll set it to zero. Now we'll move 12 frames down the timeline. And rotate the z parameter to 90 degrees. Oops, negative 90 degrees, there we go. Now, I want to be perfectly perpendicular to 365. So let's actually change the y rotation back to zero. Now, in looking at this, I can already tell you that I don't want my y rotation to keep rotating over this little area here.

I wanted to start rotating right when my z rotation happens. So, make sure your time locator is at frame 112 and we can just copy and paste the previous keyframe. That way, we'll have a rotation, it sits for about 12 frames. And then it goes to our next rotation. Now, this is where we need to kind of fine-tune the positioning of the elements in the scene. And since we've actually rotated our camera control null, our position data has shifted as well.

So select layer one, hold down shift, and press p. Now, obviously, we don't want to keyframe this position data. What we need to do is actually open the effect controls. So I'm going to hold down shift and press E to open up my effect controls, and that's where I have my position data stored. Now, I like where the camera was oriented at the end of our animation. So let's just move back to two seconds. And add a keyframe for one of these position parameters. What we want to do is move everything to the left.

So let's click and drag on the y axis and sure enough, when we rotate it, the y axis still stayed oriented to the object, not to the scene. So that's why this is moving up and down on the y. So when we rotated our null, the XYZ position data actually stayed in the same orientation it had originally. That's why it's sliding in this fashion when I drag on the y position data. So let's make sure we're at two seconds, and add a keyframe for the y position.

And let's go ahead and move 12 frames down the timeline. And just drag to the left. Yeah, we'll set it to about negative 340. Perfect. So, as you can see, when it comes to actually animating with the null, it gives you a fair amount of control. That's different than just animating directly on the camera. The key is to click and drag on the different parameters of the null object. That way, you can easily move through the scene without getting confused as to exactly where you are in the scene.

1/9/2014
Take a round-trip tour through the cameras in After Effects, CINEMA 4D, and C4D Lite. Ian Robinson shows you how to gain control over the different types of cameras in these three powerhouse motion graphics programs, and generate even more dynamic, interesting effects. First, he shows how to create and animate a simple camera rig in After Effects, and then jumps to C4D Lite to introduce 3D elements into the animation. Next, Ian uses CINEMA 4D's more robust toolset to further refine the camera positioning and movement. The last chapter takes you back to where it all began in After Effects, where you tie all the comps and graphics together, add transitions, and render the final project.
Topics include:

Video: Animating with the camera rig