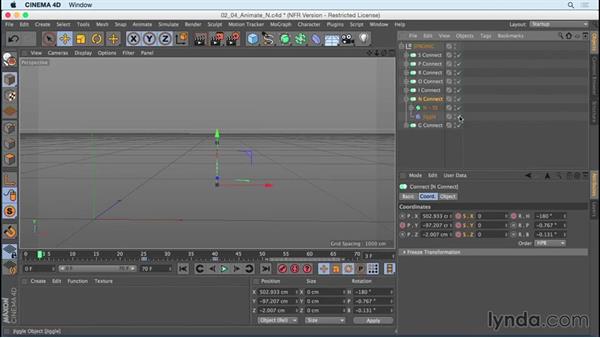 - For the letter N, we're gonna use the Jiggle deformer…with a linear falloff and set keyframes…to have our N jump up and twist in…in a cartoonish way.…Let's go ahead and…just kind of solo our N…by going to our Viewport Solo Single…over here and enabling that.…Let's go to our Jiggle deformer.…See how we are axis points right over here.…Let's just zero out our X and Y coordinates…so it's centered to our letter here.…And then we can turn the Jiggle deformer on.…

So what we're gonna do is,…use a linear falloff on our Jiggle deformer…and go from Infinite to Linear with our shape.…And then, for Orientation,…let's do a -X.…So now we wanna make sure that our falloff is set okay,…and we want to enable our falloff…to be 100%…so we have 100% Jiggle over here,…and then tapering off the Jiggle…as we go from right to left.…So the right part of our N…will have more Jiggle than the left.…

So that looks all good so far.…Now we can actually go and keyframe.…But first we'll turn off the Jiggle…and just start keyframing.…So we're gonna keyframe our N…