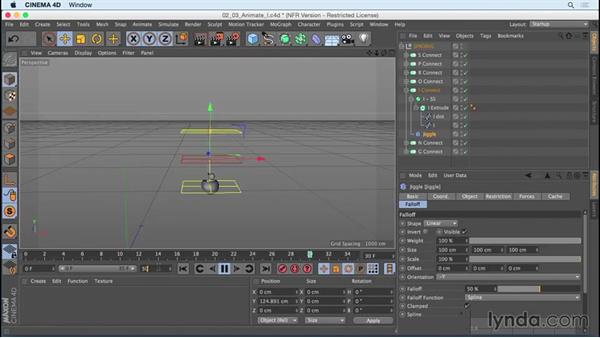 Join EJ Hassenfratz for an in-depth discussion in this video Animating "I" using Jiggle deformer and Scale, part of Mograph Techniques: Creating a Bouncy Cartoon Logo in Cinema 4D.

- In this movie we'll animate the letter "i" in our logo,…and then apply bouncy movements by using…the jiggle deformer in scale.…Now for the i, let's just so ahead and solo this,…we're gonna use the jiggle deformer with a linear falloff,…and we're also gonna use scale keyframes…to just scale up our i and our i dot.…We'll have our i dot pop on after the…main part of the i scales on.…Now what we're gonna do is we're actually gonna…scale from the bottom of the letter i.…

To do that, we actually need to go into our…connect object and uncheck this center axis.…We don't wanna center it anymore.…And then what we're gonna have to do is just…kinda zero out all of the settings in our x and y here,…and also our connect object, or subdivision surface object.…And then let's just see if it's in the right spot.…Let's go and reposition our i there, looks good.…And we'll solo it again.…Now what we can do with unchecking that center axis…and then zeroing out all of the coordinates…in our extrude, in our subdivision surface, we now have…