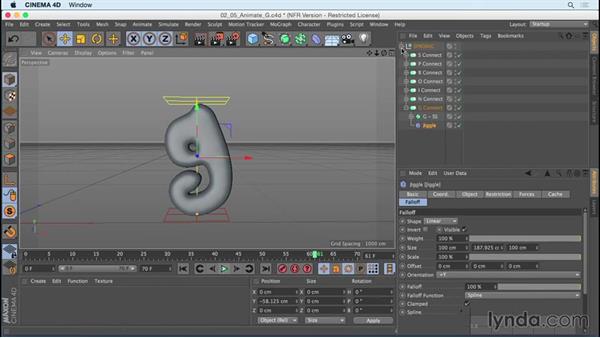 For the letter G, we'll use the the jiggle deformer…with the linear falloff and set key frames to have…our G rotate in, so it looks like the curling…tail of the G really flops in.…So let's go ahead and first go to our G connect.…We're going to disable this center axis.…What I want to do is actually change the axis…center to more closer to this hole in our G,…so what we're going to do is go ahead to…our G extrude, zero out our coordinates,…and do the same thing for our subdivision surface,…so now we have our object centered on our axis…and now we can actually edit the anchor point…by enabling the axis modification tool,…and kind of just position this up towards here,…so this is where our rotation axis will be,…so we can really get a velocity going in…our rotation and have this tail part of the G…really look like it's flopping in, in a nice, fun way.…

So now let's go ahead and close that up,…get out of our axis modification tool,…and now we can just go ahead and solo…this G object by going to viewport solo single,…