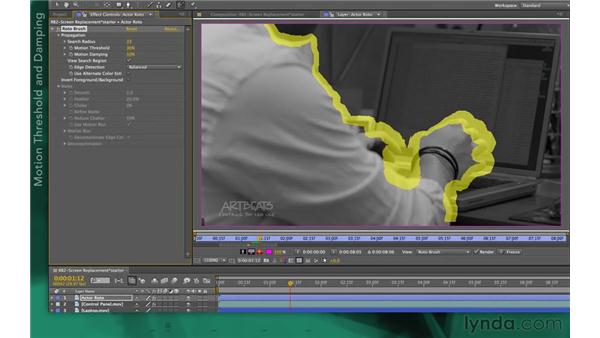 The base frame we created is indicated by this little gold bar down here in the Layer panel's timeline. The light gray arrows extending to the right and left are called the Roto Brush Span. The direction of the arrows indicates in what direction Roto Brush is propagating the information from this base frame to frames later and earlier in time. Our next step is teaching Roto Brush how to best propagate that initial information.

And to do that, I go to the Effects Control panel and twirl open the Roto Brush Propagation section. The first area I'm going to pay attention to is the Search Region, how far Roto Brush is looking to determine any movement in that boundary between the foreground and background. I can press Page Up or the number 1 on the regular part of the keyboard to step earlier in time and watch the development of this region. Or I can press 2 or Page Down to step later in time and watch how this region changes from frame to frame and Roto Brush tries to determine how the boundary between the foreground and background is changing.

My first job is to step just a couple of frames away from that base frame in both directions and look for potential trouble. For example, I see some potential problems around his little finger as he uncurls it and extends it. I see my Search Region is getting pretty close to chopping off the tip of that finger. That has me a little bit concerned. A Roto Brush may not be capturing that movement correctly. So I'm going to locate to a frame or I see potential troubles of that Search Region being too tight on the finger, it's probably going to be around one second, give or take a frame for you, and then play with the Search Radius size.

I don't want the Search Radius to be larger than necessary otherwise Roto Brush may be looking at parts of the image that have nothing to do with the edge between foreground and background and therefore might capture a false edge. In other words, I want Search Radius to be small as possible without getting into trouble, but here I see I am getting into trouble with his current size. So I'm going to slowly scrub it larger until I see the little finger completely enclosed. We will just a little bit of buffer around it to convince me Roto Brush is going to capture its movement correctly.

You notice that every adjustment I make it takes a little extra time to calculate because Roto Brush is propagating the base frame using this information back to my current time location. Search Radius at 33, it's giving me a nice buffer around that little finger so I'm no longer worried. The next two parameters, Motion Threshold and Motion Damping, determine how Roto Brush detects movement between the foreground and background; basically, how the segmentation boundary moves. You don't want Roto Brush generating false positives.

In other words, seeing a motion where there isn't any, and you don't want false negatives, Roto Brush failing to pick up on motion. Threshold is how much movement Roto Brush has to see before it says, Okay, I'm convinced the segmentation boundaries moved. Damping is how much it tries to reduce its tendency to go grab movement that isn't really there. So let's go ahead and keep stepping through our timeline and look for areas where Roto Brush maybe failing to pick up motion. Now I'm really concerned about this region right through here.

I know this hand is moving every frame, but when that search region goes down to nothing that indicates Roto Brush does not think there is movement there, but there is nothing to search for. That concerns me. So I'm going to slowly reduce the Motion Threshold until I see the yellow Search Region join up along this edge. Now I'm convinced Roto Brush will pick up the motion along the edge of that hand. For Motion Damping, I'm going to be looking for edges that should not be moving, like around this picture frame, and make sure the Search Region isn't wandering around necessarily when an edge is not actually moving.

In this case, since there is movement in the camera from frame to frame, it looks like I don't really have any issues with Roto Brush grabbing too much information and getting false triggers around stationary edges. I could perhaps increase damping a little bit if I thought the Search Region was getting too big around this edge, but I'm pretty comfortable with how it's detecting that edge. So I'm going to leave Motion Damping at its default of 50%. Once I have these three parameters set to my liking, I notice that two of them can be key framed if the shot changes radically overtime.

I will disable my View Search Region and now I'll turn my attention to the Edge Detection and Color models that the Roto Brush uses. Now that I'm satisfied that the Roto Brush is looking in the right places for the Edge, next I want to make sure that Roto Brush is indeed correctly finding that edge as it moves from frame to frame away from my base frame. So I'm going to start back on my base frame again, that little yellow bar, and now I'm going to step earlier and later in time using 1 and 2 on the normal keyboard or Page Up and Page Down on the extended keyboard and see how well this propagation boundary tracks my foreground.

So I move earlier in time, I see I am having trouble with the gaps between fingers in there and a little bit of trouble tracking the edge of the laptop down in here. Although again I could make the determination that I'm happy with the matte line being right there. Far more troublesome are the keyboard versus the bottom of his hand and also gaps between the fingers appearing and disappearing. Once I've moved just a couple of frames earlier or later in time away from the base frame, I'm going to try different choices for the Edge Detection method and the Color Estimation model used by Roto Brush.

Edge Detection gives you three choices: Favor Predicted Edges says, Fall back on the information we found in the base frame and keep looking for that information earlier and later in time. In this case, even though I'm a few frames later than my base frame bias towards was back on that base frame. Favor Current Edges instead says, you know, this shot to me have changed a lot from frame to frame, put more emphasis on what happen on the most recent frame not what happened back at the base frame.

Balanced, obviously, comes up with the balance between the two. Now Balanced isn't working great because I'm finding gaps opening up between these fingers and problems along the keyboard here. So let's try Favor Predicted Edges. And since I do that you'll notice that the propagation boundary has indeed tightened up this gap between the fingers and tightened up the bottom of his wrist as it falls next to the keyboard. Now just to be thorough, I'm going to try Favor Current Edges. I see these gaps are opening up again, that not good.

And Balance is a little bit better. It got a bit more of the keyboard down here. But obviously, Favor Predicted Edges is giving me a better solution so I'm going to use that. Next is Alternate Color Estimation, what color model Roto Brush is using as it tries to find those edges between foreground and background. In this case you just want to toggle those parameters on and off and see how well Roto Brush is doing, again, while you are a couple of frames away from your base frame. So I'll toggle it on and see how things change.

Now looks like I'm getting a false positive here because I don't think there's actually a hole between his shirt and his thumb and there isn't. So that's wrong. It's also turning out to be a little bit wavy along the top of the picture frame here compared with color estimation off. So to me it's clear that the default setting is giving me a more accurate propagation than the Alternate Color model is. So I will leave that off for now. Now that I have set up the parameters for how Roto Brush should propagate the information from that base frame, next I need to actually manually teach it, what's right and what's wrong, as it makes mistakes.

And that's what we're going to do next.