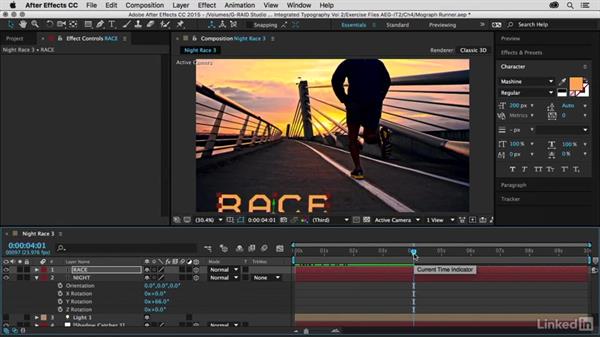 After you have prepared your scene, it is time to add your titles. These titles should spread across the Z plane and matched carefully to your footage. What do you do if your animation is jittery? In this movie, author Eran Stern will demonstrate how to add your titles to the Z plane an dhow to fix unwanted 3D camera jitter in Adobe After Effects.

- After we've prepared the scene it's time to add our titles. Those titles should be spread across the Z plane and matched carefully to the steps of the runner in the video. Once we do it we can check that everything is sticking together and if there's a need we can modify the camera animation to fix an unwanted jitter. To add the titles, I'm going to select the video layer once again. I want to make sure that I can see the effect controls because I need to also select the 3D Canera Tracker effect.

This will show you all those track points in different colors. What I'm looking for is some tracker which is closer to where I want to place the first title. This cyan guy looks like a good candidate, so I'm going to click on it, then right-click on it and I'm going to choose Create Text. Now the reason that we are seeing Create Text and not Create Text with Camera is due to the fact that we already created the camera, of course, and we set up the ground plane and the origin.

If I'm going to create this text, you will see that it is standing on this floor so this was the reason why we prepared everything before, but the orientation of the text is not to my liking. I want it to face the camera and I can also see that we have this shadow on the floor. This shadow, of course, is a result of the Shadow Catcher layer that we've created in the previous movie as well as the light. Now I will show you how to set both of them later.

For the moment I'm going to turn off the visibility of the light and I'm going to select the text, then i'm going to press "R" in order to show the orientation and rotation and I'm just going to start to work with the wire rotation until the text is more or less facing the camera. In my case, the value of 66%. We may change this later, but for now I want to format the text and also colorize it. I'm going to double-click on it and this should launch the Character panel.

If you are not seeing it, go ahead to the Window menu and choose Character from here. In my case I know already the font that I want to use so I'm just going to start to type "Mash" in order to show the Mashine font. I'm going to use the regular weight, although you can choose regular and bold so you can go your own way. I'm going to choose Regular here. Now I want to lift up some nice orange color from this sunset, so I'm going to try and click over here, and because I've already done it before I've come up with a value which I think is going to work good here.

I might as well just type it in and this way if you are following me, both you and I will reach the same result. I'm going to type 30 for the U, which are 30 degrees, of course, and then 65% for the saturation, and 100% for the brightness. Of course this is not the correct word TEXT is just the default text that After Effects wrote for us so let's double-click on this "T" icon and type down the word "Night".

I also want to scale it so let's start by 200 pixels. I think this should be a good starting point. Now this NIGHT title looks like it is in the right position, but if we are here let's try to align it to the left foot of this runner. I'm just going to drag it on its Z axis to somewhere over here. I'm just trying to eyeball it it doesn't need to be precise but something like this looks quite nice.

Here around 2 seconds I want to create a second title which is going to be the Race title. Let's select the first one Command D or Control D on the PC in order to duplicate it. Once again, wait for the little gizmo where it says Z and then hold down shift and just drag it so it will look like it is in the same plane. What I'm trying to create here is some kind of invisible line between the middle of this text and the middle of the shoe.

Now let's double-click and reformat this from NIGHT to RACE and at this point we can select both of our text go back to the Selection tool and just move them to the left so they will appear as if they are in the middle of this road. You may need to fiddle with it for each one of those words differently. We can see that we are in a good spot. The third step here is the place where we want to create our third title.

Once again let's return to the timeline duplicate another copy and double-click in order to reformat it. This should be the word REGISTRATION. Once you've finished to type it you can press Enter and then once again we need to move it on its Z axis. Now it's a little bit difficult to see so I'm going to zoom out then I'm going to switch back to the Selection tool which you can do of course by pressing V and then I'm going to once again hold down Shift and drag it so it will appear as if it is aligning, once again, with the middle of this shoe.

Now this title is bigger than what we need so I might as well come over here to the Character panel and just scale it down to, let's say, 140 pixels. Of course we can move it so it will look like it is in the middle of this road over here. Alright, we have two more titles to create in this same system. Once again I'm going to press Command D and let's move in the video to this point where we have the foot just touching the ground.

Place the title over here double-click on this T. This is going to be a very easy one, so "IS" and then we're going to do the same number once again. I'm going to duplicate the title, move forward in time to where the foot is touching the road, press V in order to return to the Selection tool and then I'm just going to move this once again trying to eyeball it more or less to where I think it should be.

Double-click on this text and write down "OPEN". Alright, let's return to the Selection tool and create a short preview to check the result. It looks quite okay until I guess this point around four seconds where we have this strange wiggle. This is due to the camera clocking effect which is actually keeping us to a great result.

We can see that some of the text is just shaking in its place. To fix it in this case, we need to find out where the problem starts. I'm just going to make sure that nothing is selected so I can see. I think it starts over here. I'm just going to move maybe four seconds and then we need to delete a few key frames from the baked camera that the effect has generated. First I'm going to press U. We can see that for every frame we have a key frame for the position and the orientation.

From this point until I guess around maybe six seconds, we have this interference or shakiness. The camera is continued to track into the shot so if you want to smooth this animation what you can try is to select all those key frames in between four seconds and six seconds for both the position and orientation and delete them.

In order to do so I'm just going to zoom in a little bit more tighter and gently try to marquee those key frames once again between four seconds and six seconds in my case. I'm going to press delete in order for After Effects to ignore all this data but it will still interpret it between four and six seconds so if I'm going to just play this part we can see that now it's moving quite nicely.

If you spot it in other places if you see that something else is not moving right, then of course you can for example I see that the OPEN word here is a little bit jerky you can come to this point in time and once again select all those key frames and I'm going to delete them but I'm going to leave the last one in place. This will make the movement much more fluid as we can see over here. This is how you add titles across the Z space as well as fix some of the camera glitch movement from the 3D tracking solve by carefully deleting the unnecessary key frames.

Now be careful when you do it. It works here due to the linear tracking of the camera but this is not a magical solution so sometimes you will need to retrack the shot in order to fix it. In this case we are quite lucky and it's working fine so we can move forward to the next step.

Along the way, Eran demos a handful of advanced techniques, from tracking, rotoscoping, and particles to distortion and camera effects. After watching this course, you'll be able to create impressive promos, trailers, and openers that will stand out from the rest.
Topics include: