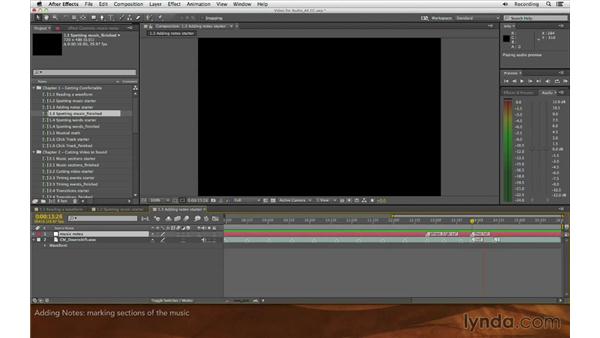 After you're done spotting the beats in your music, your timeline should look something like this and again I'll make it a little bit larger so you can see the wave form in more detail and use the Plus key to zoom in and see the finer time increments. I've marked each strong beat in the music and also noted where there's little rolls in the drum. (MUSIC) That happens twice, and then the main body of the music starts. And at the end, we have that little role reprised.

(SOUND) This, quite often, is enough to give you a grid of how you might want to start editing or key framing. However, it doesn't contain a lot of data. Once you twirl up the waveform, which is useful, because it speeds up redraws, and takes up less real estate, you may forget what each beat is, or where the music starts, or where things change in the music. So it's perfectly okay to add more notes on additional layers. In this case I'll make a layer, new, null object, no objects never render, so I know I'm completely safe adding one of these.

I'll turn off is video switch anyway, so I don't see its outline in the comp panel and I'm going to go ahead and rename this null, which is actually just a special kind of solid in After Effects. As music notes. I'm going to use this layer to note sections of the music. Not individual beats, but more of a macro level of what's going on. For example, I have these two introductory phrases. (MUSIC) So I'll make sure my new note slur is selected, hold down Option on Mac, Alt on Windows, and type in a note that this is Phrase One.

I go to the next beat (MUSIC) and mark this as phrase 2. And I think that guitar was important to indicate that the music was starting, so let's go ahead and mark where that is again (MUSIC). (SOUND) So it's kind of like a prefix to the music. So I'm going to go ahead and just make myself a little note that this is guitar pre or prefix before the main body of the music. Now the real body, the real heavy section of the music starts here. (MUSIC) So I'll mark that as main body. Go closer to the end, start marking out whats going on here, I'll back up a few beats earlier in time, press the decimal point and audition what's going on. (MUSIC) So the guitars kind of ending here (MUSIC) so we have to note that as guitar, maybe suffix continuing to use my English terms here. (MUSIC) That is actually also a repeat of the same phrase, let's erase three, guitar.

(MUSIC) Maybe mark Final roll (NOISE), and last hit. Again, I'm using this additional layer as a sort of macro set of script notes as to where we're in different acts of our play here. The very beginning of the music, the body of the music, the ending of the music. Now in After Effects, there's important distinction between layer markers, which are what we've been creating so far, and composition markers.

Layer markers are attached to a layer. If I move the layer, the markers move with that layer. It kind of makes sense. But if I have no layer selected Place my current time indicator and press the asterisk key, I'm creating what's known as a comp marker, or a composition marker. They do not move with individual layers. They are high level macro markers for the entire timeline. And sometimes those can come in handy, particularly if you have a whole bunch of layers in your composition.

And maybe you're particular layer with your music's getting scrolled down off the screen having a comp marker along the top at all times may really help you figure out what's going on. Now again to make a comp marker no layers should be selected. I'm going to press F2 to deselect all layers. Just like with layer markers, if I hold on Option+Alt and press asterisk, and can go ahead and make note such as phrase two. And another important tip in After Effects is if I hold down the Shift key and press one of the numbers along the top of the keyboard, I can place a number marker such as number two. Maybe indicate the second section of the music.

So I'm going to back here and mark section 1, introduction, and I'm going to go ahead and delete this marker. You're going to right click to delete a marker, or just hold down the command key on Mac, the control key on Windows, you get a scissors icon and clip away that marker. Then go down later for the very ending And my final phrase (MUSIC) hold down shift and press three, to mark section three of my music. Now in AfterEffects, by pressing one, two, or three, I can jump immediately to those composition markers. To move between layer markers, you have to rely on the J and K keys, which will move between all markers on all layers.

So now I have a nicely spotted piece of music. I don't need to look at my wave form anymore. I don't need to take up all this real estate or deal with the redraw time and quite often when we start a project this is the very first thing we do. We get the music, spot it out and maybe hand this composition to other people working on the same project so we're all on the same page as to where the beats are in the music and where the sections are in the music So that we can go ahead and cut that guide. But of course, you're not always dealing with music, sometimes you're dealing with dialog.

And that's what we'll deal with in the next movie.