Achieving a shallow depth of field 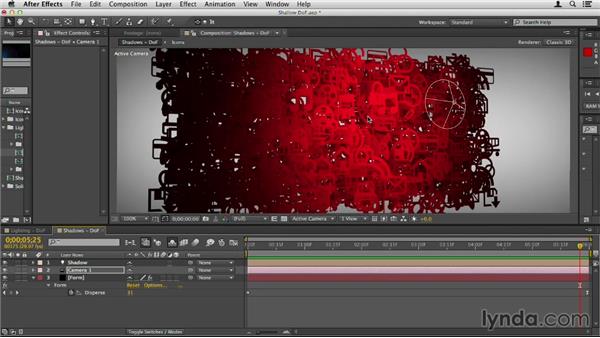 Join Chad Perkins for an in-depth discussion in this video Achieving a shallow depth of field, part of Learning Trapcode Form (2013).

In this tutorial we're going to be revisiting some of the projects from this chapter, to beautify them with the shallow depth of field from an After Effects camera.. So you remember this earlier in the chapter when we're looking at lighting, we have this globe of particles that goes around, and it says some cheesy, generic slogan. So what we're going to do is, we're going to open this up. Open up the camera setting here, and what we're going to do is turn on Shadow Depth of Field, which enables us to specify a range of focus for the camera.

By default, depth of field is off. That just means everything, by default, is in focus. So if I click the Off button, it turns on Depth Of Field. Usually the set, default settings are such, that you won't notice too much of a difference in most cases. We really need to specify here, in order to get our, a custom look here at the Shallow Depth Of Field. These three settings. Focus Distance, Aperture, and Blur Level. Focus Distance refers to the area, the distance from the camera, in which subject is in focus.

So I'm going to take this actually to 1300. And that means that pixels 1,300 or, stuff 1,300 pixels away from the camera, is going to be sharpened and focused. And that equates to this line right around the edge of this globe right here, and we can see a little bit, of blur on these objects here. Its very subtle and not super great. So lets enhance this a little bit. Now your tendency might be to be jump to the Blur Level value. The Blur Level controls the amount of blur, but that's just going to make all this stuff kind of blurry.

It's not going to be what we want. So what we actually want to do is adjust the Aperture. And in a real world camera, the more you open up the aperture, the more you thin the area that is in focus. And so the same thing is here in after effects. So as we increase this Aperture, what we're going to do is we're going to be limiting the amount of stuff that's in focus. So right now we have all of this stuff that's kind of in focus, as well as this stuff is right along the edge. And you can see these dots right here.

And when you do that, we basically take the viewer's attention off of all the garbage here in the corner, and even some of these dots and stuff like that here on the sides. We really just focus people's attention right here on the text, and the very edge of these icons which just really beautifies this effect. And you see as we click through random frames here, and actually let's go ahead and hit the Home key and preview this. So, now you can see as we play this back, that we have a much more beautiful, elegant and professional little video clip here.

And that's because our eyes naturally go to areas of focus and sharpness. And when you're creating something professional, you want to have areas of focus. Amateur stuff, kind of like what this project was, honestly, before we added this Depth Of Field, it's just, there's stuff everywhere to look at. And so when you really look at professional stuff it's clean, elegant and simple, and there's less for your eye to focus on. You really want to draw your attention to right where it's important, where everything's in focus, and that's what we've done here by creating a Shallow Depth Of Field. This globe it's, it's beautiful, but we don't want people looking at these icons right here because this is not what's important.

Our message right here, our super cheesy (LAUGH) generic slogan. That's what's important. And that's what we want people looking at. So go ahead and pause that. Look at another example. Go back to our shadows from the previous example here. I went ahead and added some animation to this. And by the way, you'll notice that as you play around with this Shallow Depth Of Field stuff, that it slows down your system a lot. So, we have in this example, we have not only a light, but we have a light casting shadows on tons of not just regular particles but custom particles.

And in a moment we're going to add some Shadow Depth of Field, and it should run very slowly. So, something, something to be aware of. if you plan on doing this a lot in your work, you might want to think about passing that cost onto clients, because it's really going to slow your work flow down. So again, we have these particles as we saw in the last movie, but this time they are assembling together. And I'll I've done is just animated a very simple camera pan, and I've also animated the Dispersed value of these particles to be even larger, back down to something simple like 30.

So that way they kind of gather together, and it looks way cool. We have our shadows, like we put in the last movie, and we now have this cool animation these, these particles kind of gather, but there, it's still lacking something. So lets add some Shadow Depth Of Field, especially right here, look at that, nobody wants to see that what is this garbage. So let's go open up the camera here. And close up the Champs Form Section, and go over to the Camera Options. And we want to turn On Depth Of Field, and you see already, that takes just a second, even just to register this.

So, you know, that we, put in this information actually render this animation. It's going to go pretty slow. But let's go ahead and change the Focus Distance here. I already calculated this, so we don't have to scrub through. But I figured the Focus Distance I wanted, and probably about 1300 here. Now, you'll notice that we're going in this order. We're setting the Focus Distance, so we know what's in focus, and then we are adjusting the Aperture to control how much of that stuff is in focus. But honestly, one of the things that I like to do is, let me, I should right-click on focus, and reset that for just a quick second. Here's a trick that I use to figure out what's in focus. I'm going to change the Aperture really high, to something like 500. And actually that's the Aperture value we're going to use anyway, so leave it set at 500.

That way the stuff that's in focus is very clearly in focus, and the stuff that's out of focus is very blurry. And so, we have a very thin focus plane. And that allows us to set the Focus Distance then so, we could really see what's in focus and what isn't in focus, as we adjust that Focus Distance value. It's almost like in a camera when you push that button to zoom in to pull focus. That's kind of what I do here. So, I turn up the Aperture so it's really, really sharp. I get my Focus Distance, and then I go back to my Aperture and I can set it to what I want.

So I'm going to set this Focus Distance to 1300. Actually think I'm going to leave my Aperture value at 500, and I'm going to hit the End key to jump to that last frame to see what that looks like. Pretty good, but another thing that we can do here, is increased the blur amount of these other particles. So if I increase the Blur Level to 150, then that's going to make the blurry stuff even blurrier. Now again, we only have a thin area of stuff in focus here.

A very narrow area that's in focus, because our Aperture Values so high. So if we wanted more in focus, we could take this down to like, let's just say 150, for example. And we still get a really beautiful effect, and it's much more subtle. See we just have the soft focus here, but our eyes are still drawn here. But it's, you know, we got more stuff in focus. And that's what happens when you lower the Aperture Value. Now, just as a side note, one, I'm going to take this back up to 500. One of the things that happens just by default, when you create a really Shallow Depth Of Field with a really high Aperture Value, and that's even enhanced by adding more blur to this, is that this things smaller.

They look like miniatures. Have you ever seen those photos or videos, somewhere on-line or whatever, where it looks like a whole city is just like a miniature. This is the way they do it, is they create get big areas of blur, and it just makes the stuff that's in focus look smaller. So if you are having a big, you know, let's say this is corporate logos or something like that, that's really important, and we don't want to diminish them or make them look small. So you might actually want to take down the Aperture Value and take down the Blur Level a little bit, so these particles don't look like miniatures. In my case, I actually kind of like the way this looks. So I am going to hit the Home Key and preview this animation, with our new super Shallow Depth Of Field.