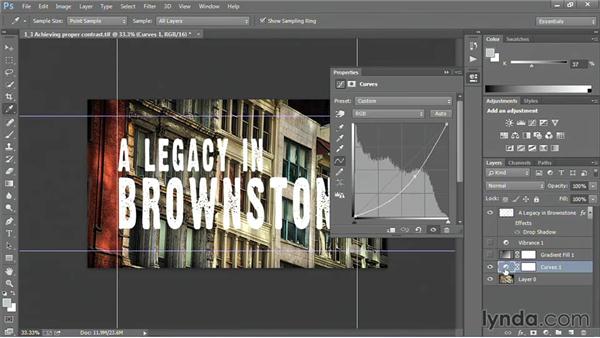 One of the biggest challenges with backgrounds, is contrast ratio. Making sure that the difference between the foreground and the background is sufficient, so that you can clearly see things. For example, I'm wearing a purple shirt. And I'm against a mottled, gray background. Well, I stand out pretty well. If I was wearing a gray shirt, I might look a little bit strange. Or, maybe like a floating head. You see, we've introduced some color into the set, blue and gray, with some gradients on the back drop in the physical set, just to help you guide your eye.

Well, the same thing applies when you're working with video graphics. In this case, I've got some text over a photo. And while the font clearly matches the mood of the subject of our documentary, and the photo matches, it's really hard to read. If I take the eyedropper tool here, and I click, I can see some information. For example, there's pure white, 255. Well, let's change this to just a grayscale ramp. And I'll set this to Grayscale Sliders.

Well, over here, that yellowish building is a value about 25. And this one's about 30. And you see as you look at some of this contrast ratio, 16. We don't have sufficient contrast between the text and the background. I like to increase that distance on the grayscale slider. So that the background is more subdued, and the text pops. Well, I did this by first adding a curves adjustment. And by pulling down the midtones of the curve, it's very easy to darken things up in a very photorealistic way.

It simply looks like it's later at night. Or we've dialed down the aperture a bit. Now, when I check those, you see we're at 37, 53, 46. Well, I've automatically increased the contrast ratio, by simply using a curves adjustment. Next, a gradient fill. In this case, a black gradient at the edges, to really darken things down. Now, if I check the contrast ratios here, you see that just about everything is sitting above 50%.

Not across the board, but fairly consistently. We've got good values. In fact, I can even back the opacity off a little bit, and split the difference. I don't have to go quite as dark to still maintain a good contrast ratio. I'll pop the color here, and you see that that increased the contrast by using a vibrance adjustment. To put the color intensity up, that's made a little bit more. And then of course, making sure that my text layer actually has some sort of drop shadow.

And that's improving the contrast there between foreground and background. If you compare that to where it started, you'll see that it goes from difficult to read, to much easier. And that's all to do with the ratio between the lightest and the darkest elements in the scene.

8/12/2014
Nearly every video project needs a background, whether it's an elaborate background for a chroma key set or simply a lower third. This course shows you how to create your own still and motion backgrounds using a few simple ingredients: the files that come with the course and from other sources on the web, and the built-in tools in Photoshop and After Effects. No special assets or plugins required! Rich Harrington introduces practical and easy-to-implement techniques that are suitable for video editors of all levels, and can be used to quickly add texture and style to your next project.
Topics include: