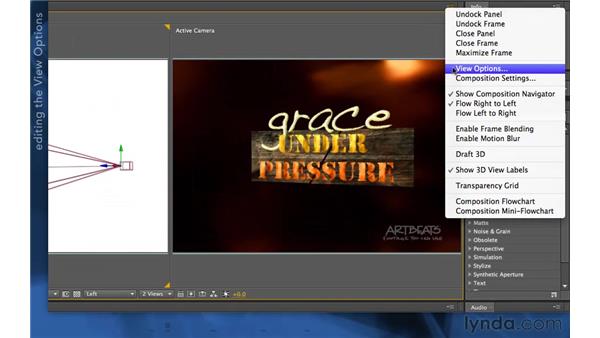 Join Chris Meyer for an in-depth discussion in this video 3D view options, part of After Effects Apprentice: 11 3D Space.

In this movie, I'll show you a handy option to make the Camera Wireframe…visible at all times.…Notice that as I select the layer, I no longer see the bounding box for the camera.…That also goes for the Top View and the Left View, and so on.…I would like to see this bounding box, but right now I only see the shape of the…camera when I select the Camera layer.…So here is a little tip.…First, under the Views pop-up, I'll select Share View Options.…And that way any time I change a View Option in any view, those View Options…will be shared amongst all the views.…

So if I change from Top to Left, any View Options I set for the Top View will…also be applied to the Left View.…So how do you change View Options?…In the top right-hand corner of our Comp panel, we will select View Options, and…there is a couple of options here you'll find very useful.…My favorite is Camera Wireframes.…Notice the default is to only show the wireframes for the camera when it's Selected.…But I can change that to On.…Even though we haven't added any lighting yet, you might also want to do…