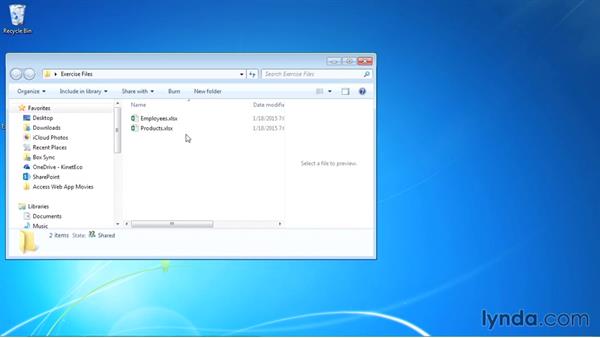 Join Gini von Courter for an in-depth discussion in this video Using the exercise files, part of Creating Access Web Apps in SharePoint 2013.

- If you have a premium membership in the lynda.com training library, you have access to the exercise files that I'll use in this course. There are two files, and they're both in a folder called "Exercise Files". You might consider downloading the folder to your desktop as I have. In the movies where I use these files, their name will appear in a banner on the screen so you'll know which one of the two I'm opening. Even if you don't have access to the exercise files, you're still going to be able to work along with me. Most of the tables we create will be built from scratch anyway.

For the tables we create by importing these exercise files, you can simply use your own data sources in Excel or a SharePoint list that you have access to.