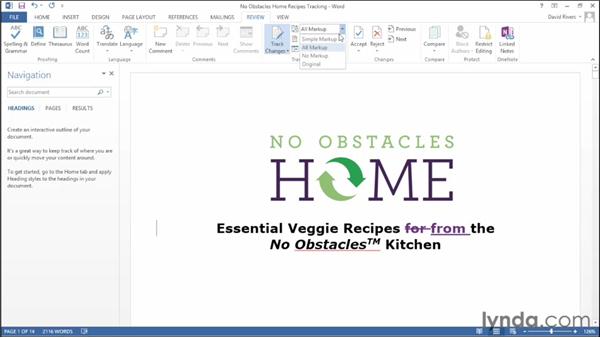 Here's a new feature in Word 2013 you might enjoy if you're accustomed to tracking changes while editing documents, especially those you might be collaborating with others on. We're going to work with this filed called, No Obstacles Home Recipes Tracking. Next, we'll go to the Review tab here and click Track Changes. Now, that turns it on and just to the right of this button you'll notice the default is called Simple Markup. This is the new feature. It's kind of an uncluttered way to show markup on your page as you're tracking changes.

Let's click the dropdown and you'll see some standard defaults from previous versions like All Markup. Let's start there. With All Markup selected and Track Changes on, let's make a change to our document here in the title where it says, Essential Veggie Recipes for the No Obstacles Kitchen, let's change it to from. So, we'll double-click for, and we'll type in from, and you can see what happens. We're seeing all of the Markup. We're seeing what was deleted, what's strike-through; we're seeing what was inserted. As we hover over this, we see some information about who did it and when.

And now if we change it to this new feature called Simple Markup, it's more of an uncluttered view. We see the change here, but the only thing that's changed on our page as far as an addition is over here in the left-hand side, this red bar indicating that a change was made on this line. As we hover over that red bar, we can see a message indicating we need to click it to show the track changes. So, when we do that, we see those changes, just as though we had All Markup and you can see it actually switches to All Markup.

And now we'll go back to that bar, which has changed from red to gray, click it again to hide. Notice that here on the Ribbon, we're switched back to Simple Markup. And that's not just for tracking changes, but any other markup like comments from the previous lesson, for example. Let's just scroll down to the next page. There's a letter to the customer, and as we scroll down it's an uncluttered view but markup is appearing over here in the left-hand margin. There's that red bar indicating something changed here. To see what it is, we just click. Okay, it changed from thanks to thank you, and then we'll click it again to hide it.

So, that's a new feature called Simple Markup that allows you to unclutter your page as your tracking changes, but still be able to know where those changes are being made.

1/29/2013
Discover what's new in the latest version of Microsoft Office, from Word 2013 to OneNote 2013. In this course, David Rivers reviews the suite-wide enhancements to Office, like cloud integration, Touch Mode for interacting with touch-enabled devices, and Ribbon customization, as well as individual app improvements added to the new Office. Take a look at PDF editing in Word, flash fill and quick analysis in Excel, the new Presenter view in PowerPoint, new templates in Access, social media integration with Outlook, and much more.
Topics include: