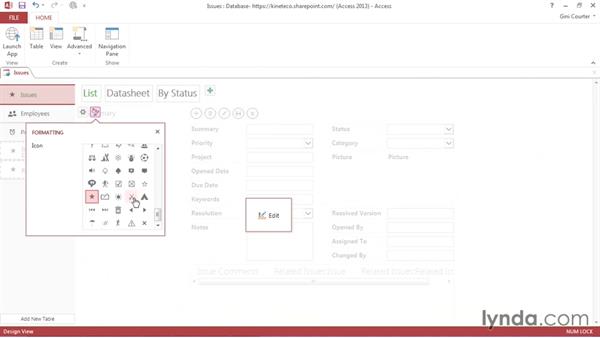 Join Gini von Courter for an in-depth discussion in this video Formatting the table icon, part of Creating Access Web Apps in SharePoint 2013.

- In our web app, each of the table names…is preceded by a star, star Issues,…star Employees, star Projects, and you might think that…that operates just like a bullet, and it does,…but you can actually change that icon…for the individual tables.…So if, for example, for Employees I wanted to have…something that looked more like people,…Contacts, Employees.…I can click the Formatting button…and the only formatting I can apply…is actually to choose a different icon.…

If I scroll up a little ways and I hover…over one, people, okay, I'll do that.…And notice that it changes the icon here.…That's pretty good.…And if I wish, I can try to find…an appropriate icon for Projects.…I might be able to do that, something like…a file folder, for example, or a timeline.…You'll want something that actually seems…to work, if you can, something that's similar…to what you are looking at.…So notice we have mail…and ships and boats.…All projects have timelines, so perhaps…an alarm clock would work for that.…

And Issues could be anchors,…things that weigh you down, or Issues…