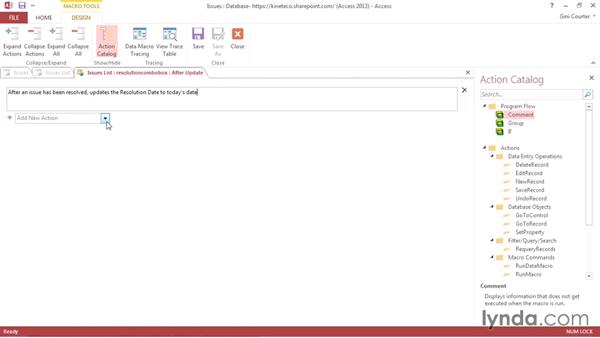 - I've made some changes to this view,…and I also made one change to the Issues table,…because I'd like to create a process…that doesn't already exist in my app.…Normally, when someone has resolved…an issue, they change the Status,…and choose Resolved from the drop down.…When they do that, and only after…they have done that, they're then allowed…to change the Resolution.…So if I change the Resolution,…and I haven't already set the Status…to Resolve, it won't let me change it,…it just will throw it away,…when I go to save the record,…which is actually a pretty nifty piece…of functionality.…

But there's nothing here that captures for me…when this was actually resolved.…I have a date that the issue was opened,…I have a date that the issue is due,…but I don't have anything that tells me…when it was resolved.…So it will be really hard for me…to determine some basic information…about issue resolution.…Like are we resolving issues before…or after the due dates?…So here are the two changes that I made.…In the Issues table, I added a Resolved Date…