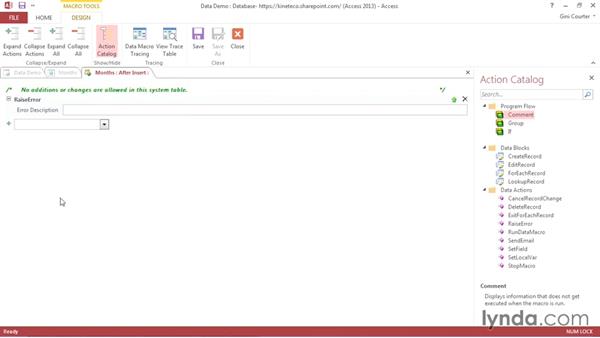 - Back in the data demo web app…that I used earlier I've added a table of months.…And this table is very similar to tables…that I've created in lots of databases…that allow us to take a look at two different ways…to look at a particular month or day…and they're system tables.…I don't want users to change them…and yet they need to have access to them.…In this case, I have four fields,…the name and abbreviation of the month,…the calendar number of the month,…and then the number of that month in our physical year…which begins in July.…

So, let's see how we can make sure that a user…can't insert or delete data from this table…because we don't want them to do that.…Let's return to Access.…You can see the view here but we're not…going to attach this to an event…that occurs in the user interface.…We're going to actually attach this…to an event of the table, a data event.…So, I'm going to open the table in design view…by choosing Edit Table.…Here are our fields and I'm going to click Design…on the ribbon and you'll see there are our three events…