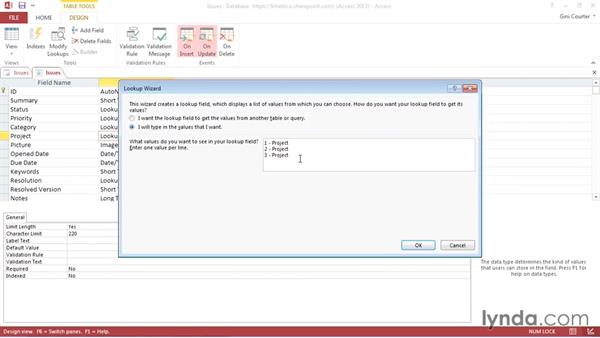 Join Gini von Courter for an in-depth discussion in this video Creating relationships between tables, part of Creating Access Web Apps in SharePoint 2013.

- If we want to relate two tables within our web app…then we need to create a relationship using a Lookup.…Indeed a Lookup is really the only type of relationship…that we have here between tables.…So in my Issues list I have a drop down called Project…and if we view the data here we don't have any,…but it will let us see what is in the drop downs,…we'll find that what we have is 1 - Project, 2 - Project,…3 - Project, in the same way that under Priority…we have a list and under Status we have a list.…

These are typed in lists.…That's one what to create a Lookup…and if you have data that's not dynamic,…that isnt's going to change that works just fine.…But right now the way this is set up…every time there's a new Project…we need to come in and modify our web app.…We'd be better off having a separate table…so we could simply add data to the table…and we would then create a Lookup…that was pointing at that table…rather than a Lookup that was pointing at a list…that we had typed in.…As you're initially building your web app…