Creating a data macro to check for records 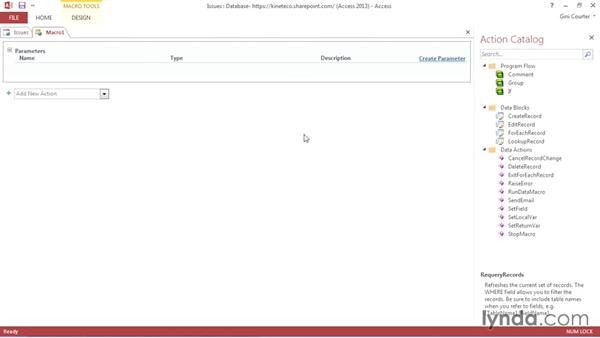 Join Gini von Courter for an in-depth discussion in this video Creating a data macro to check for records, part of Creating Access Web Apps in SharePoint 2013.

- When you're creating a web app…or you're creating anything that uses a condition,…you usually wanna test to see what happens…when you have records that meet the condition,…when you have records that don't meet the condition.…You wanna test, for example, a record…where the due date is exactly 30 days from now…and 31 and 29 to see what happens.…Let me show you what happens…when there aren't any records.…In this case, I've changed all of the due dates…so none of them are in the next 30 days.…

Watch what happens now when I click to apply our filter.…There's a very brief flicker where it says…there aren't any records, and then it immediately…says, well, then go ahead and enter a few.…You can task these folks to do something in the next month.…No, not so much, that's now how I want this to behave.…So how can we hide this?…Well, the answer is we can't, but what we can do…is only apply the filter if there…are actually results to display.…In other words, we're gonna go into the data table…and say anything in there that's due…

Video: Creating a data macro to check for records