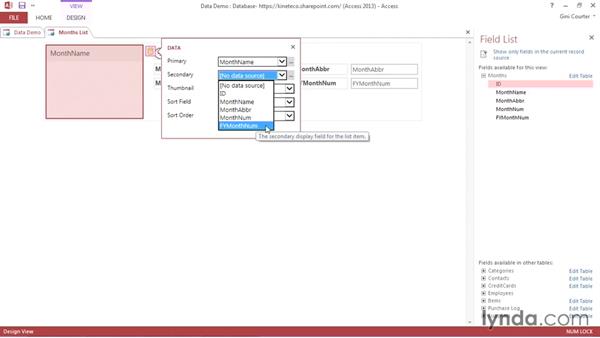 Join Gini von Courter for an in-depth discussion in this video Changing settings in the list control, part of Creating Access Web Apps in SharePoint 2013.

- I'm back in my Data Demo App…and this is another table called Months.…What this table does is it gives me a way…to represent months.…So that if I have January I can look up its month number.…I can also look up its month in our fiscal year,…which starts in July.…And that's just great, but when I'm in my List view,…here in my List control, it's sorted in alphabetical order.…That's interesting because I'd prefer…it to be sorted in chronological order,…for usability instead of alphabetical order,…I guess for amusement's sake.…

So how do I fix this?…Well, let's go into Access and let's change…the settings on the List control.…Here we are in the List view.…Here's the List control.…So let's edit it.…We looked at this control a little while ago.…Now it will make sense what we want to change.…Because right now the Primary is the data that's displayed.…And we do want the Month Names displayed.…We could also say then, after that why don't you say…what the Fiscal Year Month Number is.…That would be helpful for us.…

But, this is the problem, our sort order.…