Adding a calculation for related items 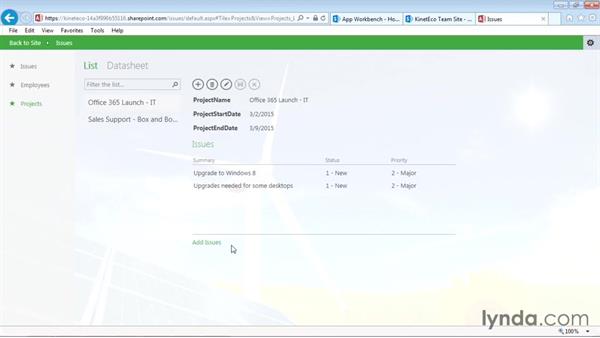 Join Gini von Courter for an in-depth discussion in this video Adding a calculation for related items, part of Creating Access Web Apps in SharePoint 2013.

- Many of the list views have one or more…related items views,…and these come from the look up tables.…These come from the relationships that we have.…For example, the Issues table…uses a look up from Projects.…Therefore, when we're looking at the Projects table,…we have the ability to see Issues.…That falls in this area here.…These related items views…also have their own settings.…Let's take a look at how this works…before we come back and do some tweaking.…

I'm gonna launch the app.…We're on our way to our browser.…We will hang on while it talks with the server.…I've added more Issues and more Projects…so we can see how this works.…If I look at a list view of Projects,…you'll notice that when I have a Project selected,…I can see Issues.…If I choose, for example, a particular project ...…And notice that we have the ability…to switch between them here ...…We have a nice little piece of navigation on the left…that automatic,…and shows the information from that first field…that we saw when we looked at the data for this view.…