Using filters to sculpt the sound 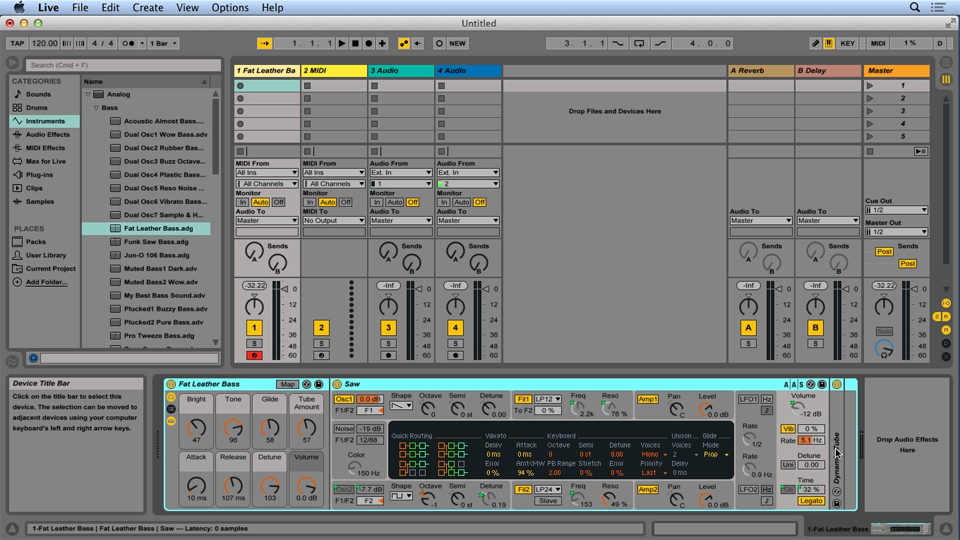 - Analog is a virtual synthesizer that creates sound using subtractive synthesis. By definition, subtractive synthesis shapes sound by filtering or subtracting some of the frequencies output by the oscillators. Let's take a look at Analog's filters. So let's build a basic patch that uses some of the techniques we've been talking about. I'm going to grab Analog, I'm going to drop it on the first MIDI track here. We'll add a little bit of detuning. I'm going to match that so the pitch is centered. I'll go up three on one and down three on the other oscillator (synthesizer plays) Check that sound out.

Let's say on oscillator one that I'm going to lift a little bit of the sub oscillator level. So I'll click the oscillator shell, and I'll come over here on the right, and I'll pull up that sub-oscillator. (Loud synthesizer) Now we have a little bit fuller sound to play with. If I click on the global shell over here, we can see the four quick routing options. We can see that we're currently using quick routing option number three. Oscillators one and two are both outputting their sound, and they're going up and going through filter one, then through amp one, and then being output.

That means the only filter that's active right now is this filter one. An audio filter is similar to any other filter in that filters allow some things to pass and then they stop other things from passing. Now just to demonstrate what an audio filter does, I've set up a couple filters on this audio track so that we can get a little bit better display. Let me open up this first one. We've got the fabfilter Pro-Q2 plugin. I'm using this because it just has a great display.

So we're looking at a graph, essentially, of a low pass. Or, if you want to refer to it by the opposite name, you might call this a high-cut filter. The line across the middle represents zero amplitude. And across the bottom, you can see the frequencies. So when you're looking at a diagram of a frequency response of a signal passing through some device, you always show the low frequencies on the left side and the high frequencies on the right side. This area where my mouse is right now; This is the area of the frequencies that are going to be allowed to pass through the filter.

In fact, we call that the pass band. Over here on the right, this area that's gold, is in what we call the stop band. These will be the frequencies that we're going to attenuate. Now you'll notice that the line between the two is not a straight line; in fact, we see something that we refer to as a slope. I'm going to bring the controls back up, because we can see right now that the control is set on this for twelve DB per octave. If I click on that, we can see that there's other options.

So if I choose an 18 DB per octave, we can see that the line gets more vertical. Again, just to summarize, we have a low-pass filter. My mouse right now is pointing in the area that's in the pass-band that we're going to let through. And on the right, we see the stop-band. We've talked a little bit about the slope. Let's take a look at the opposite of this. If I click on this second filter, this would be a filter that's referred to as a high-pass or low-cut filter.

In this case, the stop-band is going to be on the left, and the pass-band on the right. So if we go back over to analog and we look at filter one, the chooser that is right next to that, if I click the drop-down, we can see that we have several options in our filter. We have low-pass, and the 12 DB per octave or 24 DB per octave options are the degree of severity on that slope of the filter.

So the 24 DB per octave is going to have more of a vertical line or cutoff. Additionally, we see that we have also the high-pass options of 12 DB and 24 DB per octave. Then we also have band-pass, which is going to allow us to pass a group of frequencies that are within a band, and it's going to reject anything that's outside of that band. In effect, a band-pass filter is actually made up out of a low-pass and a high-pass filter put together.

Additionally, we see a notch filter, and then down on the bottom we see a special option, which is a formant filter, which we can use to impart a little bit of a human speech-like characteristic or effect to the tone. What else do we have here? Well, probably the most important parameter that we have here is the frequency knob, or what we refer to as the cutoff frequency. This allows us to move the frequency that divides the line between the pass-band and the stop-band.

So with the low-pass 24 DB filter chosen, right now this is doing nothing. If I play a note (synthesizer sounds) the filter isn't doing anything. But as I start to reduce the frequency, it's going to move the cutoff frequency lower, and we're gradually going to attenuate more and more of the higher frequencies. Let's hear what that sounds like. (Decreasing synthesizer sounds) - You can hear it getting darker and darker. If I go all the way down to the bottom, we get no sound, because I'm essentially cutting off all of the sounds that's passing through this filter.

(increasing synthesizer sounds) - Now if I reverse that, let's choose a high-pass filter instead and I'll go to the 24 DB per octave option. Now this is going to work the opposite way. If I go all the way down, we should hear the entire waveform (synthesizer sounds) As I dial the cutoff frequency up, I'm going to be attenuating the lower frequencies and our sound should get brighter and thinner. (synthesizer thinning) If I go all the way up, we should end up with no sound again (synthesizer sounds fluctuating) Now, probably the most frequent filter used when shaping sound in a subtractive synth is a low-pass filter, so I'm going to choose the 24 DB option for the low-pass.

Let's hear what that sounds like. (escalating synthesizer sounds) You can hear that it makes it a little brighter, but it adds a lot of character to the sound. Once the resonance is up, as you sweep the frequency setting, you get much more of an interesting sound as a result. Let's check it out (resonating synth sounds) Much more of a human characteristic about that.

Now, let me warn you that you want to be careful with the resonance feature; if you push this really, really high, you can actually get some quite aggressive results. Let's check it out and see what happens. (Escalating synth sounds) Now, right there at about 80 or 85 percent, you can really hear another tone beginning to creep in. Sometimes, that's described as that the resonance is actually self-oscillating. It's creating another note. (Demonstrates note) As you look at the amount of signal that's coming out over here in the meter on the right, you can see that we're right there, close to pegging it.

When you turn up this resonance feature, you can actually cause some almost feedback to happen, and you're going to have to watch your audio levels. Let me bring that back down. Some interesting things can be done with the filter-routing options. One of the things we can do is actually cascade the two filters in a row. I'm going to go back over to the global shell, and I'm going to choose option number four here. We can see that both oscillators one and two are output through filter one, which is then routed through filter two, and then is output through the amp section of amp two.

So I'll click select that one. Just for example, one thing that you might do, is you might use a high-pass filter to whack off a little bit of the bottom. For example, on a bass sound, you may want to just shape the low end a little bit, so that it's not conflicting with the sound of the kick. But your intention is not to use that to shape the tone of the sound, it's just almost a utility to clear a little bit of low-end. Then, we can use the second filter to actually work on the overall tone that we're looking for.

So I'm going to change this one to a high-pass filter, and if your kick was, let's say, around 65/70 hertz, I might pull the frequency knob of this high-pass filter down to, let's say, around 75 or so. If you hold your command key down while you're dragging that option, you can move in a finer increment. That would be the control key on a PC. I won't bother with resonance so much here, but that just shaved off a little of the low-end.

Then I can take the frequency knob on filter two, and we'll put that in the 24 DB option so that it's a little steeper, and now I can drag that down to shape the overall tone (demonstrates note) and then bring up the resonance, maybe. It's starting to get there. One other thing that I want to show in this basic overview of what we can do with the filters, is to show you that there is actually a drive option on both of these, down here in the center display.

I'll also do that on the first one, because we can add that drive option on both of them. (Synthesizer plays loudly) You can hear that getting louder. But that will be an option that you're going to want to take advantage of later on, because it can add a lot of character to a sound. As you can see, choosing an oscillator wave shape is only the starting point. Routing the signal through one or more filters, and then adding some resonance and filter saturation makes a big difference.

2/5/2016
Want to get rich, vintage synth sounds? Get up and running with Ableton Live's virtual synthesizer, Analog. Rick Schmunk shows how to create sounds using oscillators, sculpt the sounds with filters, and add motion to the sounds using modulation. He wraps up the course with practical "recipes" for creating a variety of archetypal analog synthesizers sounds, including sidechain saw bass, mellow pad, and vintage lead sounds, with Ableton Analog.
Topics include: