Sequencing the kick, snare, and hats 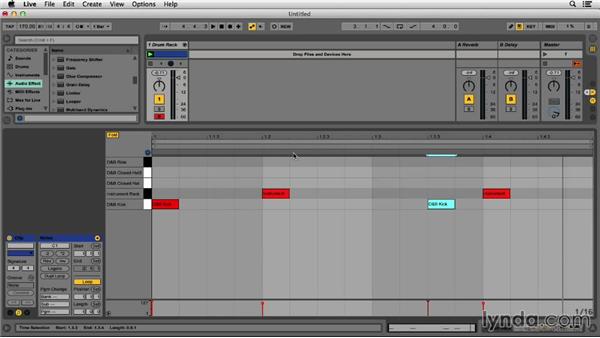 Male 1: Now let's make a drum and bass beat. I'm gonna set the BPM to 170. And I have a drum rack here, loaded up with a kick, two closed hat and a right symbol. For many electronic dance music genres, it's important to layer different samples together to get a big impressive sound. In this example, I'll take three snare sounds and a clap sound and layer them together. In Ableton Live, simply hold the Cmd key while dragging the notes on top of each other to the same pad. So let's drag snare number one to C# 1 pad. And now I'm gonna drag the other snares while holding command.

I then go in to adjust the volumes of each layer to blend them together. Let's drop this now, turn this slightly up. Also, feel free to experiment with audio effects to process all the layer's elements together. So you can go to Audio Effects, and drop for example, maybe a glue compressor. And maybe or or so And you can adjust to taste. So now we get this sample. Let's create an empty MIDI clip by double clicking on empty clips lot, and start creating a drum and base beat. For classic drum and base, I place the kick on the first beat, and the second kick on the second eighth note of the third beat. Make sure the kick velocity is almost all the way up if not all the way up. Let's highlight the kick, and bring the velocity up.

If you wish you can add a few lower velocities closed hats in between the eighth notes and for this I have a different sound in hat I'm gonna change the grid to 16th and I'm gonna add on the second 8th note on the first beat and the second 16th of the second beat. Let's look at that. Let's change some velocities. I'm going to move over the note, hold Cmd and click up or down .And to get a more driven forward feeling, I'm also gonna take this hat, make it a 16th note and push it forward.

I will take this one away, and this one. We'll only keep those two. Excellent. Let's also move this forward. I'm going to place the ride on every beat to give our drum pattern a fuller sound. So let's change the grid size to a quarter note. Let's place a ride. On each beat. Let's select the key with the corresponding sample, hold Cmd, and drag the velocity slightly up. Let's play it. It is very important that you play around with velocities. They will make your beat more unique and dynamically interesting. Velocity is on of the two main factors of the groove. The other being timing. 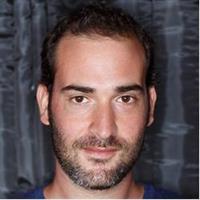