Getting your tracks imported 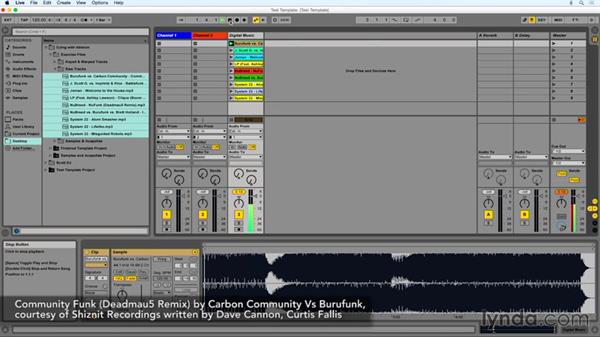 Join J. Scott Giaquinta for an in-depth discussion in this video Getting your tracks imported, part of Ableton Live: DJing.

- Now that we have our basic template set up, we're ready to start importing tracks. I'm gonna show you two different ways of doing this. One way will be to import digital tracks from your hard drive. And the other way will be recording a track straight from vinyl. Some of you may have an extensive vinyl collection and would like to be able to use it in Ableton. So, let's get started. First, we'll start with the digital import. If you don't have any tracks available at the moment, you'll be happy to know that I've included a folder of tracks that have been made available for this course courtesy of Shiznit Records, which is one of the awesome labels I released music on over the last few years.

You can access it from your desktop here if you've downloaded the exercise files. First, I'm going to create a new audio channel to the right here, so we can store our imported tracks, and then later organize them. I'll rename the channel to Digital Music for now. The next thing I'm gonna do is go to my Ableton Preferences and go to the Record Warp Launch tab. I'm going to turn off Auto Warp Long Samples. If this were on, Ableton would guess at where the beats were and place warp markers accordingly.

And in my experience, it never gets it right. So just turn this off and do it by hand. You'll save yourself a lot of time, trust me. Next, I'm going to grab all the music from our Raw tracks folder and drag it into the slots of our Digital Music channel. (short instrumental music clip) You'll notice that Ableton starts to analyze the tracks and build the waveforms here at the bottom. You can see that when you double-click on one of the clips. Awesome. We've got them all imported.

We can play any of them now by clicking on the play button of each clip. But Ableton won't know what tempo they're at until we warp marker each of them by hand. (fast-paced instrumental music) I'll show you how to do that in a later video. For now, we're going to import a track from vinyls so that you can see how that works. Now, I've got the Techniques 1200 turntable here plugged directly into channels three and four on my interface. I'm gonna use one of my old tracks that we had pressed to vinyl. So, I'm going to create a brand new audio track and then rename it to Vinyl Music.

Then I'm going to set the input of this channel to 3 and 4, which is the input the turntable's coming in on. Then all I have to do is make sure my levels are right. Hit record and gauge on the channel, and then record the track in. And I'm actually gonna tab over to my other view here. I'm gonna click this channel to In, so that we can monitor what's coming in on the input. Get my turntable ready to go. Hit record, hit play on the turntable. (instrrumental music) We're gonna jump ahead to the end so that you don't have to watch the entire song being recorded.

All right, zoom out here, let's stop Ableton from recording. Take the needle off the record. All right, so now I can drag it over to the clip side of Ableton, it will be ready to warp marker. It's a simple as that. Now that you've got a bunch of tracks imported into your sessions, probably a good idea to talk about saving. But instead of using the standard save function, we're gonna pick a different option which is here in the file menu. It's called "Collect All and Save." What this does is gather all the audio files associated with your session, and save them into one folder.

This is super handy to make sure that your critical files are in one place, so that you don't have any issues loading the session later. So, let's do that now. Great, so now we've got all our tracks in one folder with our session, and we're ready to move on. 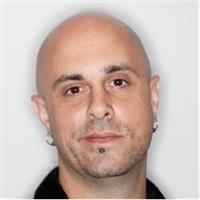 7/10/2015
DJing is a growing profession. Ableton Live takes your live performances beyond anything achievable with turntables or CD players, making your sets powerful and unique. In this course, author J. Scott Giaquinta demonstrates the techniques DJs around the world use with Ableton Live. He starts with setting up your software and hardware controllers, and importing, warping, and keying tracks in Ableton. Next he discusses cueing and playing tracks, and using fades and the crossfader to mix tracks. Then learn when you should use a DJ mixer as opposed to Ableton's internal mixer, and how to incorporate a microphone into the setup.

Scott next introduces some performance tricks to wow your audience, by integrating loops, samples, and FX. He also provides a demo of alternative controllers that can make your performances more dynamic, including a Wiimote, joystick, MIDI keyboard, and live vocoder. Finally, he discusses methods to record your live DJ set and fine-tune it after the fact.
Topics include:

Video: Getting your tracks imported