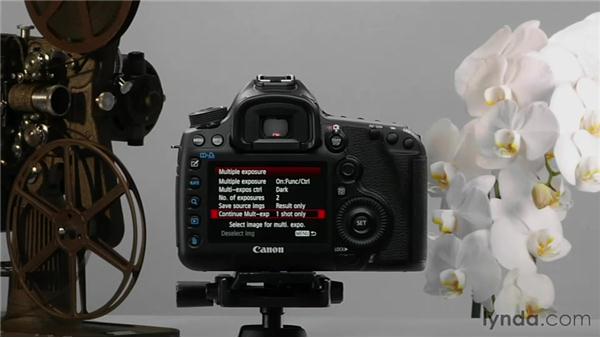 Creating multiple exposures is the process of taking one photograph or more over another so that it results in a composite image. This might be a fun feature to use if you are taking a picture of a moving object so that you can have it appear multiple times within the same photograph as it moves. This online video tutorial will teach you all about how you can create multiple exposures using the Canon 5D Mark III.

It defaults to being Disabled, of course. I need to enable it, and configure it. There are a lot of different things you can do with this command. First of all, I need to tell it that I want it turned on, but there are two different ons. The first one is for shooting still objects, like I have here. We have built a scene here with two different objects, and I'm going to merge them together, and along the way, it's going to give me a lot of really cool feedback for building a composition. The second one is for continuous shooting; going into Drive mode, and quickly firing off a burst of images, usually of a moving subject, and letting the camera put them all together.

If you look on page 178 of your 5D manual, you'll see descriptions of all of these. I'm going to go with Dark right now, because that's going to be the best for the subject matter that I'm working with, and this is going to give us a fairly clean composite. Next, I need to tell it how many pictures I want in this particular multiple exposure; I want 2. I can save all of the source images; that is, the two shots that I'm going to take, plus the final composite, or I can save the Result only. I'm just going to go with the Result only, because I think the original images are actually going to be kind of boring. I won't need them.

Finally, I have this: Continue Multiple-exposure. It defaults to Continuously, which means when I'm done shooting this two shot multiple exposure, the camera will simply stay in this mode with these parameters, so that I can just go right into doing another one. What's nice is that Canon has given you the option of saying, no, when I'm done with this one, turn off the multiple exposure thing. This is a great way of protecting yourself from forgetting that you're in multiple exposure mode, and accidentally starting another one. So I'm going to go here.

You might want to use this if you think, well, I'm not sure that I can get this right on the first try; I'm going to want to really be experimenting with this. But I'm feeling confident that I can nail this one. Finally, it won't always be the case that I want to create a multiple exposure out of things that are in the location that I'm at right now. Maybe I want to combine something that is in front of me right now with something I shot somewhere else earlier. If that's the case, I can choose this: Select image for multiple exposure. This lets me pick an image that I've already shot as my first image. I will still be doing only a 2 shot multiple exposure, in this case, but the first image will be one that I select right now; the second one will be one that I shoot.

Obviously, that's not relevant to what I'm going to do here. So I'm going to half-press the shutter button to accept all of those, and I'm going to turn on live view, so that you can watch what I'm doing. Live view is not necessary for multiple exposures, but it's going to make it easier for you to see how I'm setting this up, and also, if you do this with live view, you get some really cool additional aids for building your multiple exposure. So the first thing I'm going to do is just frame my shot, just like I normally would. Really, right now all I'm doing is all the same normal photography that I would always do.

I'm thinking about focus; I'm going to focus right there on the end of the lens. I'm thinking about exposure, so I've got my lens open all the way to try and get some shallow depth of field. I'm just doing all of my normal photographic process, and I'm metering, and taking my shot. A couple of things happen now. This icon starts flashing on the status display to indicate that I'm in the middle of a multiple exposure. It's also flashing back here. And something else really cool happens, which you'll see as soon as I move the camera.

It's giving me a semi-opaque version of the shot that I just took. This makes it much easier to compose my composite. I can get this merged with these flowers exactly the way that I want, and when I get it where I want it, I think about taking this shot. Now, just because I'm seeing this camera here, remember, I still need to think about all of my other photographic concerns. So I'm going to make sure that it focuses on this part of the flower, I'm going to half-press to focus and meter, and now I'm going to take my second shot.

And it's going to think for a moment, show me a quick review, tell me it's busy, and then I'm back to normal shooting. But I'm no longer in multiple exposure mode, because I asked the camera to bail out of it when I was done taking the shot. So let's do a quick image review here, and see what this looks like. I'm going to drop into playback, and zoom in here, but we don't want to zoom in that far. So you can see that it has merged these two images, and where there are darker pixels in my second image, they override lighter pixels that were underneath, so it's really just laid the other right on top.

Other modes are going to create more of a blend. So this is a really interesting way of getting some abstract stuff in camera. Now, of course, I could set the same thing up in Photoshop. I could shoot my two images, put them in layers, and merge them together. What's nice about this is there's a little bit of a random element to it, so it's more like shooting multiple exposures used to be. Plus, if I use the Continuous option, I have the ability to very quickly create multiple exposures of a moving object, taking different slices of time, and merging them into a single image.

So to get a handle on this, take a look at the manual, and do a little practicing with it. You'll probably find it's an interesting thing to play with.

11/8/2012
In this course, photographer and author Ben Long details the features, controls, and options in the Canon 5D Mark III digital SLR. The course begins with an overview of what a digital SLR is and takes a tour of the basic camera components. Ben then discusses the basic camera operation: changing lenses, navigating the menus, shooting in automatic mode, reviewing and managing photos on the LCD screen, and transferring photos to a computer.

Next, the course introduces more advanced exposure options: program mode, exposure compensation, ISO adjustments, and more. After Ben briefly defines each option, he shows how to adjust it using the camera controls.

A: We added one new movie, "Updated features on 5DS and 5DSR cameras."