The importance of scale in cloth behavior 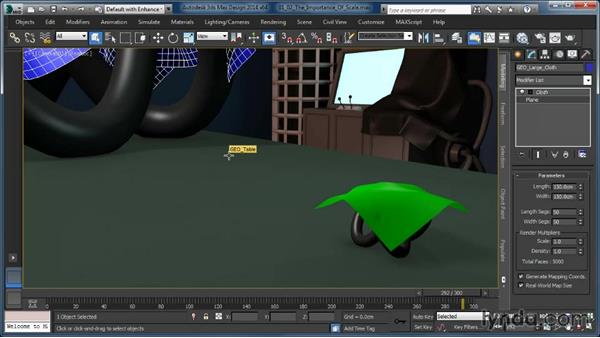 Join Joel Bradley for an in-depth discussion in this video The importance of scale in cloth behavior, part of Cloth Simulation: 3ds Max.

As with every simulation system inside 3ds Max, the scale at which our project scenes are created can, and in fact, most probably will make a big difference to the look and quality of the motion produced inside the final simulation. In our start scene for this exercise we have, as you can see here, two very different size taurus knots set up on our testing bench. Each having two very different sized pieces of cloth geometry positioned just above them. The each of these pieces of cloth, we already have a basic simulation in place, and so, when I hit play on the animation controls.

We get to see the cache results of both the motion, and final cloth positioning, that our simulation produced. As we look at the geometry on the left, we can see that things look pretty much as we would perhaps expect from something like, a sheet of cotton. Which is in fact the preset cloth type that has been used in both of these instances. The cloth drapes nicely across the torus knot, revealing the basic features of the collision object underneath, whilst at the same time producing some nice looking folds in the fabric itself.

If I just select the plane geometry here, and in the modifier stack come down to the base primitive level, you can see that what we have is a piece of cloth sized at 150 by 150 centimeters. So roughly 59 inches or just under five foot square. Behavior we see in the View Port then seems appropriate for a basic low resolution simulation on a cloth piece of this size. Well, let's hit the CK now. And switch over to the second camera that we have set-up in the scene and you can see as I again play the cached animation.

That in this instance we're getting a very different look in terms of the motion and draping of our cloth object. Not only does this piece take much longer to react to gravity than it's larger companion. But you can also see that by the end of the 300 frame simulation it still hasn't really settled into a final resting position. Even though, scale wise, there is the same proportional difference between it and the torus knot it is draping over, as there is in our larger example. The behavioral difference is being caused by the fact that, as we have said.

Both pieces of cloth geometry have had exactly the same cloth property settings applied to them. And as you would expect in reality, two very different sized pieces of the same material will react to gravity and other environmental forces in completely different ways. The problem we want to highlight here then, is that should we inadvertently create a cloth simulation scene that is not modeled to scale. So, may be scaled down considerably, as this one is. And if we then try to work with settings on the cloth geometry that had in fact been designed to work at a real world scale, as is the case here.

Well, in such an instance, we shouldn't be surprised when the results we get from our simulation bear little resemblance to the expected behavior of a correctly scaled piece of cloth. The lesson then, is that before starting our cloth simulation project it is extremely important that we give serious consideration to the issue of scale and its potential impact on the work that we're doing. This would also of course include making a good choice regarding the unit set up. That we will be working with in our simulation scene.

Certainly one scenario that is to be avoided at all costs would be that of altering the unit setting of a scene mid project. This could often times result in some very odd and unwanted simulation behavior. If we are, then, at all able to create our scene and cloth objects at real world scale, that ideally would be the option to take as it will certainly give us the most predictable and manageable results in our cloth simulations. If that's not an option, then we will definitely need to take into account the scale factor at which we decide to work whilst setting up the properties that will be applied to our cloth geometry.

Of course, scale is not the only scene setup choice that can affect the behavior. And motion of cloth inside a simulation. Another would be, the mesh subdivision type that we apply to our cloth geometry. This often times needs to be done so as to give a cloth mesh the resolution density that it needs in order to simulate convincingly. The various options available to us in this area of what we will take a look at in our very next video.

3/31/2014
The Cloth system in 3ds Max allows you to create realistic garments and fabrics, from T-shirts to tablecloths. This course, from author Joel Bradley, provides a deep dive into cloth simulation in 3ds Max, giving you the information you need to tackle your own project. Joel examines the effect of scale on cloth behavior, the impact different mesh subdivision types can make on your model, and the function and options behind the Cloth modifier, the heart of the Cloth system. He also shows how to set up and control behaviors like bend and curve, U and V Stretch, Density, Thickness, and Friction. Plus, discover how to work with groups and constraints and create effects like wet cloth and tearable cloth.

This course was created and produced by Joel Bradley. We are honored to host this content in our library.
Topics include:

Video: The importance of scale in cloth behavior