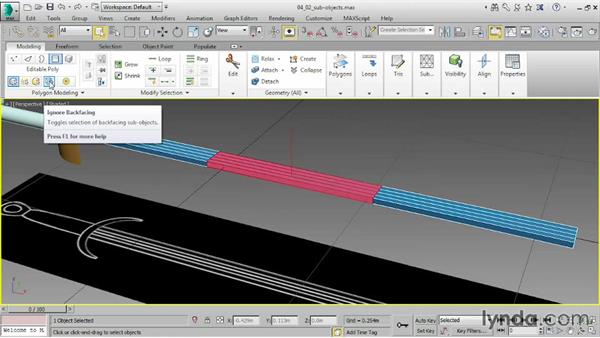 Join Aaron F. Ross for an in-depth discussion in this video Working with subobjects, part of 3ds Max 2015 Essential Training.

In 3D modeling, there are two forms of manipulating an object. Either the entire object, or part of an object. And in 3DS Max, manipulating a part of an object is called sub-object mode. When you first entire modify mode, using the graphite ribbon, then you will be in object mode. By select that blade. I'm not in a sub-object mode currently, which means that I can perform any of these commands here without having made a particular selection within the object.

But if I want to do something like move parts of the object around. Then I need to be in a sub-object mode. One way to enter those modes is from these buttons up here. You'll see vertex, edge, border, polygon, and element. The most important ones here are vertex, which is a zero dimensional point, it's just a location. A certain spot on the model. Edge, which is a one-dimensional line, just a connection between two points. And thirdly, we have polygon, which is a two-dimensional plain or surface.

We can enter these modes just by clicking. Now I'm in polygon mode and if I click on part of the object you will see that it lights up in red. So I'm in polygon selection mode. There's some shortcut keys for this, if you want to use them. It's the first six numeric buttons on the alpha keyboard, if I press the one key, that will put me in vertex mode two is edge, and select some edges three is border, which is an open border.

In other words if you have a gap on your model, then the edges surrounding that gap will be borders. Currently there aren't any borders on this object. Moving on, we've got the four key which is polygon, or sometimes called face selection. And then the five key is element, and we'll see that later. When you have more than one part to your model, they're considered separate elements. Finally, the six key will drop you back into object mode. Okay, so all I want to do here is just to take these polygons in this area, and size them and shift them over, so that these lines are over here.

So I'll just move the edges down to this end of the sword blade. Once again I'll go into Polygon or Face Mode. And once again, that's the four key. I can just click the icon, and I can drag a selection rectangle with the select tool. You've got that select object tool active, and it says select object, but it also allows us to select sub-objects. And if you orbit around with alt and middle mouse, you'll note that all of the polygons on all sides have been selected. And that's because this switch here is currently disabled, Ignore back-facing.

That's an important one. Sometimes you only want to select the sub-objects or components that are pointed towards you in the view, and in that case you would want to have Ignore back-facing enabled. If I turn it on, and then drag a selection rectangle, and then orbit around. You'll see that the back-faces did not get selected that's important. In this case I do want that to be off, so that I can select everything. Okay, so now I've selected all of those polygons or faces.

Okay, so I've scaled that, polygon selection down. And then grab the move tool and just move those polygons down a bit. And essentially what I've done is I've moved those edges over. Just to show you there's more than one way to do things, we could move the edges instead of moving those polygon faces. I can go into edge mode, click the icon or press the two button. Get in a little bit closer here, use the wheel. And you'll see that if I click once on an edge, I'll select just that edge. But if you double click you will select all of the connected edges. That's known as an edge loop.

Now we can see that more clearly, if we go to wireframe mode with F3. So that's an edge loop. Once again, Double-click, and you can select the edge loop. And then you can simply move that. So that's just another way of accomplishing the same thing in this case. You have options. One thing worth mentioning is that if you are in sub-object mode, you can not select another object. That's important. So if I've just got sub-object mode active, even if nothing's selected, then I'm kind of locked into adjusting the shape of the selected object.

I can not select another object. You can click on other things all day long, and you're not able to select them. Even if the Modify panel is visible, we can turn it back on again, so we can see it. We're in sub-object mode here as shown because this is in bright yellow, and as long as we're in sub-object mode, we can't select anything else. So we need to exit out of sub-object mode, in order to select a different object. And to do that from the Modify panel, you just click to get rid of that yellow highlighting, and now you're in Object mode.

Or, you can go back into Sub-object mode, you want to exist Sub-object mode from the ribbon, then you will click on the mode you're currently in, to turn it off. So, you see if I click once I've turned edge mode on. Click again to turn edge mode off. And now I'm no longer in sub object mode, I can go around, and select the other objects in my scene. Okay, so that's just a basic introduction to sub-object modes in 3DS Max.