Working with the modifier stack 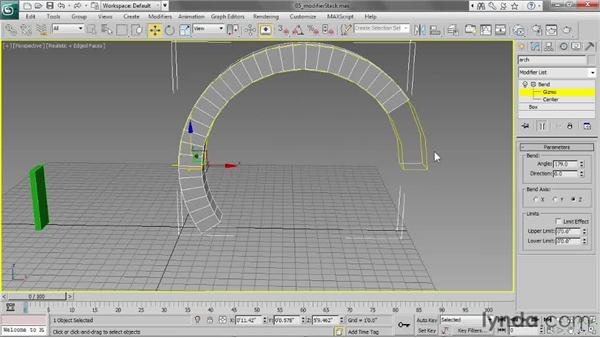 We've got a got a box and we've added a bend modifier to it. Let's look at what we can do with that bend modifier and along the way we'll learn about the modifier stack itself. The first thing you might notice is that there's a little light bulb icon next to the modifier. If I click that icon, I can turn the modifier off, or turn it back on again. I can also delete modifiers. If I don't want it, I can select it, and then press the Trash Can and that will remove it. I'll undo that with the Undo button.

I can obviously control different parameters such as the Angle. What I want to happen here with this arch is I want it to be straight and then bend at the top and then straight back down again. And I can do that using a combination of the Limits shown here, and also the position of the so-called Modifier Gizmo. To get at this Gizmo, I'll press the plus sign on the modifier, click on that and you will see Gizmo.

I'll click on the Z axis of my Move tool and drag that up, and you can see the effect of moving the Bend Gizmo. This yellow outline here is the bend modifier itself. What I want to do is I want to have the Bend effect start up here and I want this part to be straight. And to accomplish that, I can use Limits on the modifier. When you turn on Limit Effect, it'll look like there is no modifier at all, and that's because the Limits are set to 0 and 0.

But if I change these values by dragging, I can adjust the Limits, I can type in a value as well, like I can set that Upper Limit to let's say 10 feet. That means that the modifier is only affecting the box up to 10 feet away in linear units. There's a Lower Limit here as well. I'm just going to leave that at 0 for the moment. Now if I want this to be symmetrical, I just need to do a little bit of simple math here. I'll set the Bend Angle to exactly 180.

I know that the Upper Limit is set to 10 feet. If I wanted, let's say, 10 feet of straight, and then 10 feet of bent, and then 10 feet down, I can do that because my box is exactly 30 feet tall. I can move this Gizmo down, and if I move it down to exactly 10 feet, then I'll get a symmetrical structure here. You'll notice as I move it up and down, the numbers are changing at the bottom of my screen. So that's the Z position of the Gizmo, and if I want it to be exactly 10 feet, I'll just go down here to Z and type in 10 and press Enter.

When I'm finished, I can exit out of Gizmo sub-object mode. Those are the basics of working with the modifier stack, enabling and disabling modifiers, changing the Gizmo position in sub-object mode, and playing around with the limits.

5/16/2012
The course covers Autodesk 3DS Max from the ground up, providing a thorough overview of this advanced 3D graphics and modeling package. Author Aaron F. Ross covers the 3ds Max interface and walks through common tasks such as modeling, texturing, lighting, animating, and rendering. The course is centered around real-world projects that provide designers practical examples to use with the lessons.
Topics include:

Video: Working with the modifier stack