Using ambient occlusion as a foundation for rust and dirt 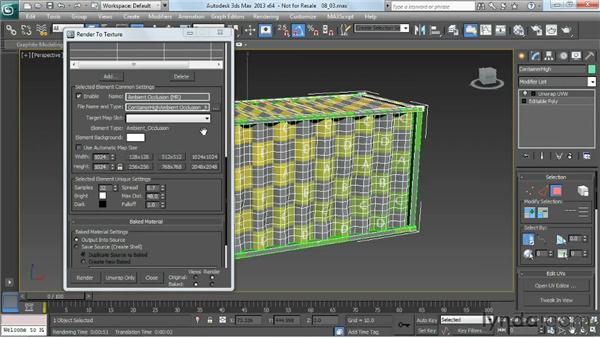 In this video I'll explore multiple occlusion passes, as different ways of dealing with dirt. I've got my shipping container, or well, half of it anyway. I've done some optimization so the occlusion bakes out cleanly. I want to go through and do a little more at some point, but now I'm going to bake out multiple occlusion passes. Sometimes we want two different parts to the occlusion. We want local very tight occlusion in all of the corners to really make those details pop out, and then a bigger more spread occlusion for things like dirt and rust that creeps up surfaces.

I'll press 0 and pull up the Render To Texture dialog again. I'm going to leave all the parameters set as they have been, using the existing channel and making an occlusion image. But I'm going to rename this one. Right now I've got an occlusion with the default name already rendered, ContainerHighAmbientOcclusion. I'll click on the button that lets me choose where it's going to go and I'll put it 2 in here. I'm going to render this out as a Targa. As an important note, when you're rendering intermediate textures like this, use a format that's uncompressed. Disk space is relatively cheap, and losing data by compressing, such as with a JPEG, means you may have artifacts in your texture.

So for the intermediate files that you are going to render, use and then throw away, render them uncompressed so you get your full data there. I'll click save and OK. In this case, what I'm going to do is vary that distance of occlusion. The original distance I'd done was at 18 and that really let the occlusion spread decently in local areas. Now I'm going to push that Max Distance a little farther out. I'll push it out to 48 and I'm going to play with this Spread a little bit. This is going to give me a foundation for overlaying rust in all of the corners, and starting to build in places where may be streaks have occurred from water running down the container.

I'll take this Spread down just a little bit. At 0.7, a little more of the darkness will hang out towards the corners. Now I'm ready to render. I'm going to render this and I'll pull up the images plus the diffused texture in Photoshop, layer them together and start to see how this is going to look. Again with rendering, I get this error message. If it bothers you, you can check the Don't display this message again box, and then just hit Continue. It's just noting that this is not specified to go to a material slot.

I've rendered out the occlusion and I'll check it out and see how it looks by clicking on the chooser button and scrolling down. There's that Occlusion2. I'll click View and see how this came out. What I'm getting here is a little bit more of a spread in the occlusion. I may want to vary this, adding in other objects to further deepen it or reducing the amount of occlusion. I bring these into Photoshop now and lay them together and see how it looks. I've opened up my working shipping container in PSD in Photoshop and I've got the ambient occlusion image open as well.

I'm going to take that occlusion image and copy and paste it after I've reduced it into this container map. As we can see up here in the top, the sizes are different. This container was drawn at 2048; the occlusion map was rendered at 1024. I do have some options in here. I could either shrink the container map or render the occlusion up a higher res. I'm going to take this and blow it up a little bit. I'll press Ctrl+Alt+I and upsize this to 2048. Now I'll select all by pressing Ctrl+A, Ctrl+C for Copy, and paste this into my container.

It pastes right over and looks pretty neat. Here's how I'm going to make this work. I'll turn off that Rust group, and take this Occlusion group and colorize it. I'll press Ctrl+U for Hue/Saturation and colorize that image. The white gets left alone and I'll shift the Hue around over to a rusty shade. I'll click OK and set its blending mode to Multiply. What this gives me is the start of a rust foundation on my container, in this case on the green one. I'll zoom in and see how well it worked. It's not bad.

I can see places where I should probably render a higher resolution. But the nice thing with it is I'm getting all the detail and the corrugations popping out here, and it's getting me the shading along those corrugations correctly. This is really going to add to that model. What I can do now is on this layer actually paint in white and start to erode or erase some of that rust. Alternately, I can paint in that same rust color on the occlusion, and further enhance it, as if the rust had started up here at the top and dripped down some of the corrugations. Occlusion is a terrific foundation for things like dirt and rust, and is also a fantastic way to simply make the detail pop out.

6/21/2012
Explore the world of modeling and texturing game props and assets in Autodesk 3ds Max. Author Adam Crespi demonstrates how to create both small and large props, from tools to shipping containers. The course begins with cloning and instancing objects for ease of modeling and unwrapping, and segues into multiple methods of unwrapping and painting texture by hand in Adobe Photoshop. Adam looks at various plug-ins that assist with normal map generation as well as sculpting in Mudbox, a digital sculpting application that can add realism and detail to your models. Finally, the course shows how to add lights to a scene and preview the objects in-game.

Note: A familiarity of basic modeling and unwrapping techniques in 3ds Max and a working knowledge of Photoshop will help you get the most out of this course.
Topics include:

Video: Using ambient occlusion as a foundation for rust and dirt