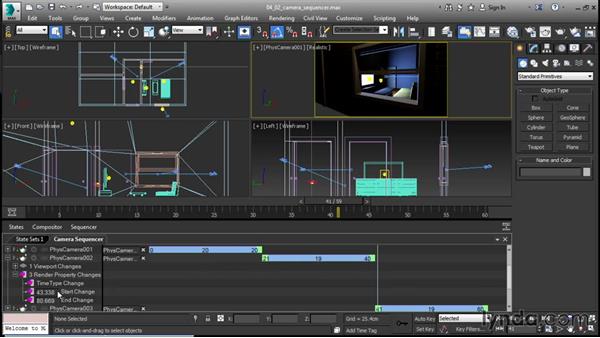 - Before opening up the Camera Sequencer,…you might want to give focus to the Viewport…in which you want that sequence displayed.…In my right upper panel here,…I'm in Realistic Shading Mode,…and I've given focus to that Viewport,…and, to open the Camera Sequencer,…go to the Rendering menu,…and choose Camera Sequencer,…and it's docked at the bottom of the Track Bar.…Notice that we get three clips in here…with this particular scene.…They got placed in there automatically…because I have three different cameras,…and they're numbered from one to three.…

As you scrub across the Timeline here,…you can see some cuts happening in this Viewport.…If you wanted the sequence…to appear in a different Viewport,…there is a command for that.…In the Sequencer menu,…you'll see Assign Current Camera Viewport.…Okay, so I'm just going to take a look at this real quickly.…As I investigate this,…I notice that there is a bit of an issue.…Between shots two and three here,…we're mysteriously jumping back to shot one,…outside the window.…

The first shot is outside the window,…