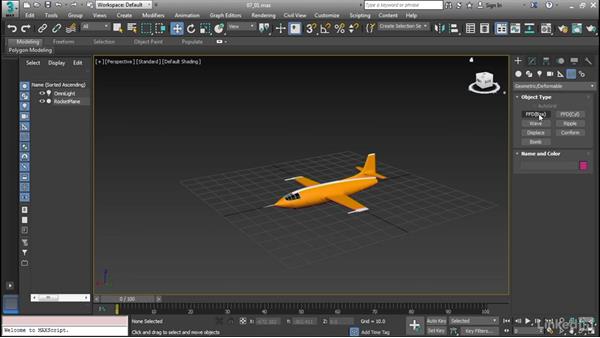 Learn about how to use space warps in 3ds Max to create visual effects and to model geometry. In this video, George creates a space warp to manipulate the shape of geometry interactively. He uses a bend modifier to control deformation, and then uses an FFD to model the shape of an object. He then uses the bomb space war to create an explosion effect.

- [Instructor] Now let's take a look at effects. We're gonna start off with space warps. Now, a space warp actually deforms the fabric of space, and this can be a great way to create all sorts of interesting effects. So we can find them under the Create panel under Space Warps. Now we have a number of different ones. We have Forces, which can be used with dynamics. So these can be anything from gravity to wind and so on. We have Deflectors, which are mostly used with particle systems to deflect those particles from an object.

Now we have Geometric and Deformable. Now these work on geometry, and they can be anything from a free-form deformation to ripples and waves, as well as a bomb, which is kind of an explosion effect. We also have modifier effects and these basically work to do things such as bend, twist, and taper. And then we also have particles and dynamics based ones. Now I'm gonna go to the Modifier Based effects here and we can basically create any one of these.

I'm gonna use the Bend, which is probably the simplest one to use, and the easiest one to understand. So I'm going to select this, and then I'm going to create it in my window, so I'm gonna go ahead and drag out and drag it up. And then I'm going to place this over this airplane object. Now the Bend space warp, if I select it, you'll see that I have tools here to control the size of it, but I also down here have controls for the actual bend, so I can bend it, in any direction, so if I want to say, bend it in x, I can do that, or y or z.

Now notice how this isn't really affecting my airplane here, so in order for this bend to actually take effect on an object, or multiple objects, you have have to link those objects to the space warp. And we can do that here by doing Bind to Space Warp. Left-click on that, hover over the geometry, and you'll see we get this little icon here and then I can just left-click and drag this dotted line, to the space warp, and notice how it highlights in yellow, and I let go.

So now that space warp is affecting my object. If I go into the Modifier panel, you'll see we have a Bend Binding. And that means that it's bound this object to that space warp. So if I select the space warp, and do a bend, you can see how it actually affects that airplane. Now one of the interesting things about space warps is that they are separate from the objects they affect.

So if I select the space warp, I can actually move it, and notice how this airplane actually moves though that distortion field. Or I can do the opposite. I can select the airplane, and move that as well. So you can see how just by moving this airplane along the x-axis, I'm still getting the effect. Now if I want to delete a space warp, I can select the geometry, and under that Bend Binding, I can remove that modifier from the stack.

So I'm gonna go ahead and select the bend and get rid of that. So let's take a look at some other types of space warps here. I'm gonna go back into my Create panel, make sure I'm in Space Warp here. And let's go over to Geometric Deformable. Now in here, I have a number of other ones, just as Wave and Ripple, which give you kind of wavelike effects. But the one I'm looking for here is called an FFD, and that stands for Free Form Deformation. And this can be actually a really great modeling tool in addition to an animation or a space warp tool.

So I'm gonna go ahead and just left-click and drag, and drag a box out about the size of this aircraft here. And then I'm gonna go into my Modify panel, and we wanna make sure we set the number of points, so we can set it to four by four by four, which is what I had, or I can set it to less, so I'm gonna set this one to three by three by three. So we can make this a little bit easier to understand. So you can see that we have three vertices in each direction here, and this completely surrounds the object that I'm going to deform.

And if doesn't, I can always change the dimensions. So now that I have this placed around the object, I can again bind that object, to this space warp. Now you can see that I have this bound to the FFD. So I'm gonna go ahead and select that FFD, and under the FFD, you'll see we have a sub-object here called Control Points. So if I go into Select or Move mode, I can actually select these control points and move them, and as you can see, I'm getting a very nice deformation of the object.

So if I wanted to make the object, say a little bit taller, I could grab, say these here, and move this part of the geometry. I could grab this, move that part of the geometry, and so on. And as you can see, by manipulating these control points, I can globally sculpt and shape my objects. Now if I click off of this, and click my Geometry, you also see that as it goes outside of this, the deformation ceases, so the relative position of this object to the space warp is important.

So if I move this object out the back here, you can see how that tail kinda gets instantly smaller. So this can be used as a really nice effect. You can move an object through this FFD to create a space warp effect. But if you're using it as a modeling tool, then you'll need to kinda keep it within the bounds of the FFD. Now once you have this in place, if you want to save the changes, all you have to do is just keep the FFD in place or if you want to, you can right-click over this, and collapse the stack.

Now if I want to bake in the changes made by this FFD, all I really have to do is select it, and delete it. And notice how that is now baked into my object. Now if I wanted to do other types of effects, I can do one, say such as this bomb effect, which is kind of a nice, fun, little effect. So all I have to do, is again place this object in the scene, and then I can bind the plane to that space warp.

So again, you can make some very interesting effects. So as you can see, there's a lot of different ways to use space warps. All you have to do to use any space warp is to bind that object to the space warp, and then the space warp can be used as a modeling or an animation tool.

9/29/2016
In a competitive 3D marketplace, certification can be a real boost to your career. 3ds Max certification proves you know the program inside and out, and it's a signal to employers and clients that you are a trustworthy professional. If you have the recommended 400 hours of hands-on experience, you can study to become a 3ds Max Certified Professional with this prep course from George Maestri. George reviews specific skills covered by the certification exam, including modeling, shading, rendering, effects, animation, and rigging. Brush up on topics such as setting up scenes and viewports, transforming objects, modeling polygonal objects, adding cameras and lights, rendering scenes, and configuring particle systems, as well as path animation and character rigging in 3ds Max.

This course isn't designed to teach you the basics, but to help you refresh your 3ds Max skills and prepare for the exam topics. Once you're finished with the course, you can feel confident taking the 3ds Max Certified Professional exam.
Topics include: