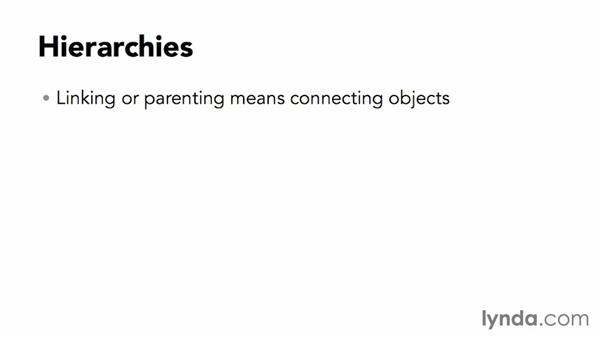 - A hierarchy is a system of control in which some things take priority over others. For example, in a military hierarchy, you have a general at the top, and then you have a colonel below that, and a major below that, and all the way down the ranks to the sergeants and the privates. So that's a military hierarchy. You also have hierarchies on your hard drive. You have folder structures. So, if Folder A is inside Folder B, when you move Folder B, Folder A goes with it because it's inside that hierarchy, it's nested inside.

We have the same principle in 3D, so that we can connect objects together, and some objects will follow others. Or, to put it in more technical terms, some objects will inherit the transforms of others. And this is a requirement for any kind of articulated animation. If you want to, for example, pose a character like this artist's dummy. I can grab the Rotate tool and select his shoulder here, and rotate it, and you will see that the arm and hand rotate as well, but then, that forearm or elbow additionally can rotate.

So, in this case, the elbow is a child, it's inheriting from the shoulder. So the entire character has been built out this way, so that I can pose it in various ways. Let's just take a moment to discuss the concepts and the rules around hierarchies. The terms linking and parenting are used interchangeably in 3D. They simply mean creating a hierarchy by connecting objects, and once again, a child object will inherit the transforms of its parent.

Transform hierarchies in 3D also depend upon Pivot Points. The pivot point is the center of the object transforms. If you move, rotate or scale an object, it all happens around that pivot point. So, if you rotate an object, it's always going to spin around that pivot point. In some programs, they're known as anchor points. So, for example, in After Effects, they call them anchor points. The position and rotation of the pivot point is critical: you have to place the pivot point and sometimes rotate it or orient it, before you can actually create the parent-child links, and before you can create any animation.

That's the starting point for any hierarchy, you have to set up the pivot points first, and then you can connect all the pieces, and finally, animate.