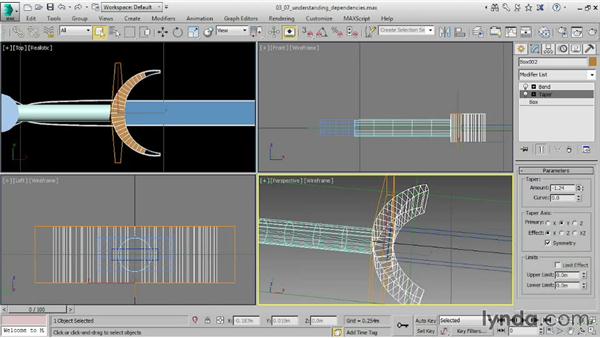 We've got a single modifier applied to the box for the guard of the sword. We also want to bend it. We go over to our top view here, and press F3, we can see our image plane in the background. We want to bend the guard, and that'll give us an example of stacking modifiers. And the important thing about modifiers is the structure of the stack is critically important. In other words, what modifier is stacked above what other modifier is going to radically change the end result.

I'll select the object once again and with the taper modifier highlighted. The next modifier I add will be placed above that, and we want to end a bend. So click on the modifier list, pull down. And then scroll down a little bit and you'll see bend. Go ahead and click that to add it. And now it's above the taper. And we can play around with the bend angle, and you can see it's bending in the wrong direction. So we want to change the direction once again. Let's try the x axis and adjust that bend.

You'll see that's bending in the other direction. So, evidently, what we really want here is y. Okay, now we're getting the effect we wanted. Cool. And we can basically try to line that up here with the image plane. It's looking pretty good actually at this point. We just want to make our box a little bit longer. But before we do anything to the box, I just want to illustrate that the order of the modifiers is of critical importance. You can drag and drop them, in fact. I can just click on that bend and drag it and you'll see the blue line, and if I release it so that now the bend is below the taper, we get a radically different result here.

It looks completely different. And, that's not the effect that we want. because what's happening now is it's being bent, and then after it's being bent, it's being tapered. The data flow and the modifier stack goes from bottom to top. In other words, 3Ds Max creates a box, then it bends the box and then, finally tapers it. And if we give this even more bend amount, you can see that it's creating this very strange shape there. If we go back up to the taper and play with that taper amount, you'll see it's doing weird things.

So we don't really want that. What we really want is to have the bend at the top. I'm going to move it back up just by dragging and dropping it. Okay so now we can just fine tune this. Once again this is non destructive. It's really a cool way of working. I can go ahead and adjust all of these. I can even go back down to the box, and increase its parameters for example, the length here. So I can just bring that out, and see how it's really gracefully adapting here. Let's maximize that top view with Alt+W so we can see it really clearly.

How long should that be? And then we go back to the taper, play around the taper amount, get that lined up an then finally go to the bend and set the precise angle that we want, and really line that up. Cool. Maybe go back down to taper and give it a little bit of curvature. So that kind of like softens this curve out a little bit, and then increase the amount. Getting more of a negative taper amount. Very cool, so that is how the modifier stack works, and this is a very powerful method of procedural modeling.

One last point is that you have the ability to enable or disable these at will. Go back to the four view port layout with ALT+W,. And you can see the little light bulb icons next to each one so you can turn them off so you can see certain effects and not other effects. So if I turn both bend and taper off, we're back to a standard box. The other thing you can choose to do is only see the result at the current level of the stack that you've currently selected, or you can choose to see the end result after all of the modifiers have been processed.

And that's this button here, show end result is on by default. If I turn it off, then what I see in my view port corresponds to the modifier that I currently have selected and anything below it, but anything above it is not displayed. If I go down to the box I only see that. Select the taper I see box and taper, select the bend now I see everything. That's show end result. Usually it's on. Finally if you need to delete a modifier, you just select it and then click on the trash can and that'll remove that modifier.

I'm going to undo that because I really want it. Ctrl+Z to bring that bend back. Cool. So that is the modifier stack, and there's a vocabulary term associated with this, which is dependencies. And dependencies simply mean that a process, such as a band modifier depends upon something. The end result of the bend modifier depends upon what happened before it or below it. And so if you understand the concept of things depending on other things, then you'll have fewer issues with the modifier stack.