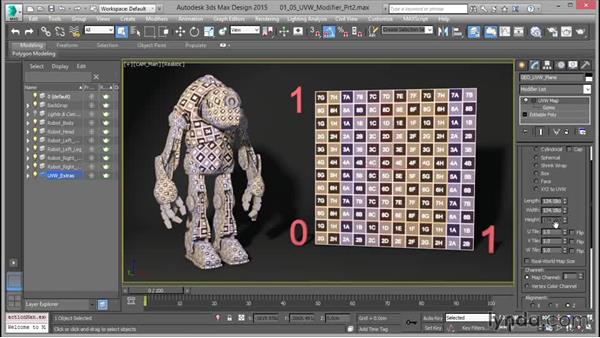 - Having looked at how we apply a UVW Map Modifier…to our geometry and having considered…a number of the mapping types that control…how coordinates are applied or projected,…let's take a look in this video…at some of the extra controls made available to us…for affecting how our mapping coordinates are working.…First of all, we have the ability to resize…our UVW gizmo by means of the length, width,…and height spinners that we see here.…Obviously, as we are currently projecting…in play in our mode here, only two of the three parameters…are available, as the height or depth parameter,…as we may prefer to think of it,…has no corresponding access on a 2D shape.…

If I switched to box, though, you can see…that we do indeed have the option to control that parameter.…We also have the ability on the UVW Map Modifier…to tile our texture interactively.…As we do so, it may appear as if we are performing…the same operation as per our changing…the length and width parameters.…While it's not particular similar, though,…the two are in fact quite different.…

11/11/2014
UVW mapping allows you to take a mathematical, coordinate-based approach to mapping 2D textures to irregular 3D objects in 3ds Max. The tools might seem complex, but this course will help you master them and put UVW mapping to work in your own projects. Author Joel Bradley starts with the basics—defining UVW space and coordinates—and introduces the UVW Map modifier, the key to applying map coordinates and adjusting map placement. From there he looks at the source wrapping options in the bitmap and procedural map nodes, and at the differences when mapping to static and animated meshes. Chapter three covers the powerful Unwrap UVW modifier and its selection, peel-, and pelt-mapping tools. The course concludes with an overview of the options in the Edit UVW window.
Topics include: