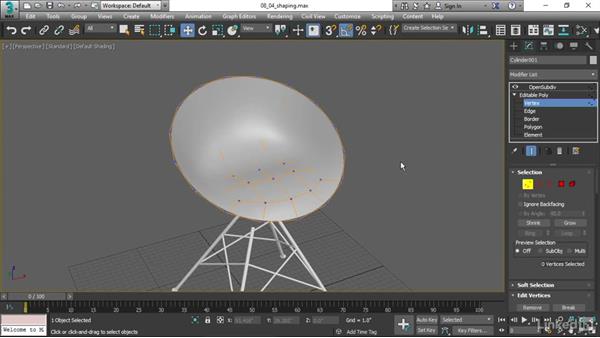 Learn how to transform sub-objects to define the form in Autodesk's 3ds Max 2017.

- [Voiceover] Here's where the magic begins. We can start shaping up our subdivided object using the editable poly base object as a control cage. We have a limited number of control vertices on the editable poly. Those are just a method for us to shape the resulting subdivided surface. I'll select the object, and so that we can see this a little bit better, I'm actually going to disable to edged faces with F4. Go down to editable poly base object in the modifier stack, and there is a new sub-object type that we haven't seen yet, and it's the border sub-object type.

That'll allow us to select all of the outer edges on the object all at once. I'll go into border sub-object type, and then click on the edge here, and we can see that border. Additionally, enable show end result. Turn that on, and now we see an overlay of the original editable poly here in orange and yellow to indicate the selection, and the subdivided object is below that, cool? So with that border selected, we can grab the rotate tool, and in left view over here, I'm going to rotate that border selection so that it tilts forward.

The convention here is that the positive Y axis points into the scene. If we want our chair to face forward by default, then we want the front of the chair to be in the negative Y direction. I'll rotate in the left view to achieve that. Cool, so you can see now we're getting a smooth result there. I can grab the move tool as well and pull that border up, and it is that easy to start modeling your subdivision surfaces.

We've maintained a circular shape to the rim of the chair by selecting all that border all at once. I can maximize the perspective view with Alt + W, and continue to edit. Maybe I'll go into vertex sub-object mode. Notice that some of the vertices are gonna be behind the surface. You may need to go into wireframe mode with F3 in order to properly select things. Got all those selected, and notice that we have some color coding here indicating the influence of the selected control vertices over the resulting subdivided surface.

If I go back to shaded view with F3, those iso lines are being color coded, and the warmer colors indicate a greater area of influence. All right, move those up a little bit, maybe select these on the corners and move those up a bit too. I'm not gonna model the entire object. You can play around with all the options here to shape up the model. Just move these points around, and you're in business, and you still have the ability to edit the structure of the editable poly in any way that you want.

You could go into the ribbon and use those tools as well. I've got the ribbon hidden right now, but I can turn it back on again so we can see it. I just want to make sure that you understand that the ribbon expects that you are at the level of the editable poly when you make edits. Like if I wanted to cut this right now or use any of these tools in the ribbon, it's of paramount importance that we are at the correct level of the modifier stack when we do it, okay? If I am at the top level here, let's say I've selected Open Subdiv, and then I go over to the ribbon, and I select a sub-object mode like vertex.

Just by doing that now, I'm in big, big trouble, because look what's happened over here. It now says edit poly. By clicking here, I added a modifier. I didn't mean to, I didn't want to, but that's what 3ds Max does, and it's very, very problematic. You actually have to have the modifier stack visible even if you're not really using it, because this sort of stuff is going to happen. You want to make sure you're actually at the base level of the object when you edit, okay, so I'm gonna select that edit poly modifier and delete it, and again, just make sure you've selected the editable poly when you try to use the ribbon.

Another way to do that is to use these buttons over here. We've got a down arrow and an up arrow and that lets us move up and down through the modifier stack, but if the modifier stack was not visible, then you wouldn't be able to see what you were doing. Additionally, if I go over to the create panel, now I don't even have the ability to do that. Now we're kind of like completely locked out here. The ribbon is great, it has a lot of really cool tools. It was sort of designed as a replacement for the modifier stack if you're using editable poly, but in reality, there is really no way that you can get away from the modifier stack, because this interface is pretty confusing, and it's going to cause a lot of problems if you just, for example, click on a sub-object mode, it's really going to trash the model and basically the upshot of it is you always have to have the modifier stack visible, even if you're not even using it.

Then if we deselect sub-object mode and go back to selecting the object, and if we have the scale tool active, we can see that it's still at 100% scale. All right, awesome, that is how easy it is to model with sub-D's in 3ds Max.