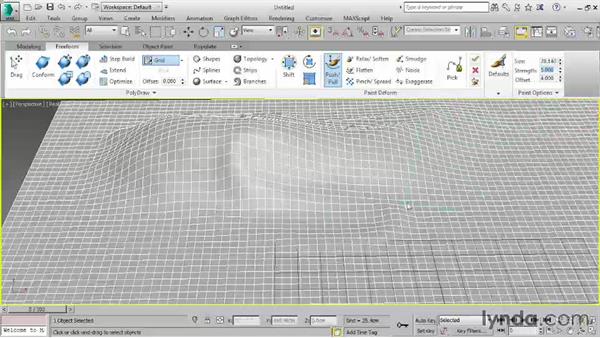 - The Freeform panel on the ribbon has some amazing tools for sculpture and we'll look at those in this chapter. We're going to create a terrain. I'm gonna select that perspective view and maximize it with alt + w, and in the Create panel click on Plane and draw that out in the perspective view. I'll then go over to the Modify panel, make some changes. Let's rename it. So, the name is up here. I'm gonna call it groundPlane and change its color as well. Set that to a neutral gray. It'd just be easier for us to see.

Let's set the length and width here to 1,000 centimeters. My scene is currently working in centimeters so if yours isn't you might wanna go into the Unit Setup. We'll just make it 1,000 centimeters on a side. Since this is a terrain you might think that we should model it at a much larger scale like 1,000 meters on a side or a square kilometer. However, if we did that then the brush tools in the Freeform panel would not work very well. They're not designed to operate at objects of that scale. So, to use the brush tools you want to create a miniature object.

I'm making one here that at 1/100th scale. Then I can sculpt it and when I'm finished I can scale it up by a factor of 100 if I need to. All right, let's set the length and width segments here to 100 and 100. That's gonna create a fairly dense polygon mesh. It's gonna be 10,000 polygons. However, the brush tool is pretty fast. It's got good performance and we won't really have an issue with an object of only 10,000 polygons. I'll just go ahead and center it with the Move tool, type in values of 0 for X and Y and now it's centered on the world.

Finally, it needs to be converted to Editable Poly. Right click, Convert To, Convert to Editable Poly, and now with the Freeform tab selected on the ribbon we've got access to all these great tools. Be aware that you need to have the modify panel active to access those tools. If, for example, you go back to the create panel then a lot of the tools are gonna be grayed out. The Modify panel must be active even if it's hidden. And in fact, we don't need even to see it now so we could actually hide it and we would be fine.

If we go up to Customize and show you why and turn the Command Panel off just to remove a little bit of that clutter. The first two I wanna show you is Paint Deform. Let's get in a little bit closer here. Click on Push/Pull and then drag the mouse across the plane and you can see I'm creating a deformation. I'm pulling those points upward. You've got some controls over here under Paint Options like the size of the brush and the strength, and, of course, you can adjust these with the spinners but it's just way more intuitive to use the hot keys.

To change the size of the brush hold down shift and control and drag the mouse up and down and that's changing the radius of the brush. So, I can make a much larger brush in order to have a greater influence over the surface. That's the size. Then we have the strength of the brush which is essentially its speed. The greater strength will result in greater deformation with a shorter brush stroke. With a strength of one this is the effect I'm getting now. Well, let's increase the strength.

I can set it up to a greater value like 5.000 and then drag across here and you can see it's having a lot more influence. The keyboard shortcut to change the strength is alt and shift So, you can click and drag holding down alt and shift and you can see that blue line here. As that line gets longer that means you're increasing the length and with a shorter line you're decreasing the strength. Cool. You can also play around with the offset here but we'll look at that in a little bit more detail later.

The offset is the amount of deformation. I'm gonna leave that at a value of 4.000 now but we'll come back to that later and look at how we can limit the amount of deformation. For now I wanna also show you how you can invert push and pull. Simply hold down the alt key and drag and now instead of pulling upward I'm pushing downward so I can create a depression there. Pretty cool. The other major thing we should look at is these buttons over here. Commit, Cancel, and Revert.

Cancel means to erase all the changes that you've made since the last time you've committed. So, committing is like baking. If I click Commit now then I'm saying this is what I want but if I haven't committed yet then I can go ahead and click on Cancel, which is the red X, and that actually erases all the changes. All right, so let's say I make a little bit of sculpture here and I decided that's good and I wanna commit to that. Then I click on the green checkbox and that commits, and now this has been baked or it's been kinda finalized.

And I can continue sculpting. Maybe I'll hold down alt and then create a depression there. And then let's say I change my mind and I say, "Oh, well, "I don't actually want to sculpt "that downward quite so much." I could click the Cancel button and that would completely remove that change and take me back to the last time I committed. All right, let's do that again so I can sculpt this. Give it a little bit more detail there and you can see now as I play with this I'm actually creating some issues here. We'll talk about how those issues got created.

We'll fix that but let's say we wanna just erase that one area but we don't wanna completely remove all the changes. That's when we can use the Revert tool. So, click on Revert and it's basically an eraser. Now, when you click and drag you're erasing selectively. You're reverting back to the last committed stage but you're only reverting it in the area that you actually paint onto. So, for example, let's say I commit to this and I do some changes here.

Let's go back to the Push/Pull tool and I make some changes and that's fine. Make some more changes over here. And I have some issue here and I'm like, "Oh no. "I gotta get rid of that." Well, I don't wanna erase all the changes I've done. I only wanna erase that one little area. That's when I would go to the Revert tool and just drag across there. You can actually use the Revert tool at any time. So, let's say I'm sculpting. Got the Push/Pull tool and I have some issue there then to get back to where I was just hold down ctrl and that activates the Revert tool.

Cool, so I can selectively erase. Once you got something you like, once again, you can go ahead and commit to that.