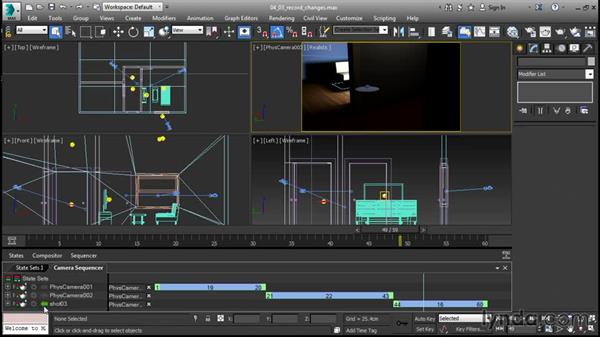 - Part of the power of 3ds Max is camera sequences.…The ability to make lighting and material changes…on a per-shot basis.…Let's say you just want to adjust the lighting in one shot…in your scene and not affect the other shots.…That's easily accomplished.…For example, maybe I want the hallway shot…to be brighter but I don't want too much light…to come through the hallway in shots 1 and 2.…Well I can just change the state of shot number 3 only.…

I recommend that before you record any changes,…you should move your time slider over…so that your parked over the state that you wish to edit.…So just make sure you're positioned over that state…that you're about to edit.…And you'll need to enable the Record button over here.…It's a grayed-out circle to the left of the arrow.…This is unlike the state sets editor.…In the state sets editor, if the green arrow is lit up,…you're always recording.…

So, here it's not enough that the state is active.…We also need to enable Record and then we can make changes…to the lighting and materials.…