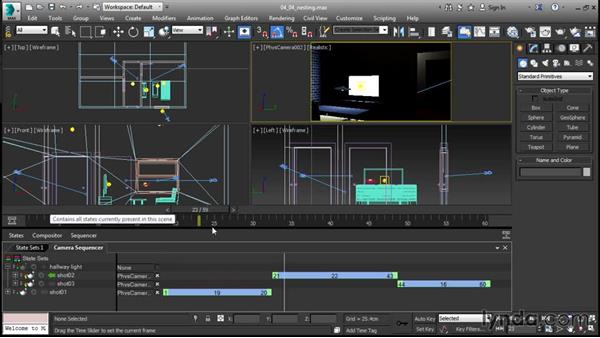 - To apply changes to more than one state you can nest them inside another state. Before I demonstrate that, let's revert the changes that we made previously. If I go into shadow three and open up its hierarchy of changes, you'll see that there is a node property change. I want to select that and delete it. That was just the lighting change that we made in the last movie. I want to make sure that that's cleared out here, because I'm going to apply the lighting change to the second and third shots here.

First let's just rename everything, keep it clean. Double click on fizzcamera001 and rename it to shot01. Fizzcamera002, double click that and call it shot02. And now we'll create a new state and nestshot02 and 03 within it. And we'll apply lighting changes to that parent state. It'll ripple through to the children. Click the add new state button and it's also called shot01 by default.

Let's double click it and rename it to hallwaylight, because that's the change I'm going to make. Hallwaylight currently has no children. We want to link 02 and 03 to hallwaylight, to nest them inside hallwaylight. And to do that let's select them both with the shift key and then click and hold the mouse and drag over the word hallwaylight until it lights up in bright green and then release.

And that is now linked or nested, shot02 and 03, under hallwaylight. And changes we make to hallwaylight will be reflected in both of these states. Before making changes, once again, I recommend that you scrub the timeline and position it so that one or the other of these is actually active. And then click record on the hallwaylight state and select the appropriate light, which is this hallway light here, and in its modify panel we can change its intensity.

And we can see it there if we increase the intensity up to 600, let's say, now we have more light streaming in through here. Okay, with that simple change made, turn recording back off again, and you'll see one node property change is added. And that's included in shot two and three. It's 600 lumens during the period of shot two, scrub over, and it's still 600 lumens during the period of shot three, but during shot one we scrub back, it's only 200 lumens.

Let's admire what we've done. I can make the camera sequencer smaller but we can't really close it. We can maximize this viewport, give focus to it and maximize it with alt w and then rewind and play. Now we did see a bit of a glitch there in the viewport display. However if we examine this closely, we will probably see that it's fine. If we go through one frame at a time, here I am on frame 42 and I'll just go to frame 43 and then 44 and because I edited these points manually, they actually snap to whole numbers.

And although the display may show us the other view there, it's actually found in the properties themselves. So it's just the display that's giving us kind of false idea of what's going on. But if we render this, it will actually render just fine and there will not be a flash frame there.