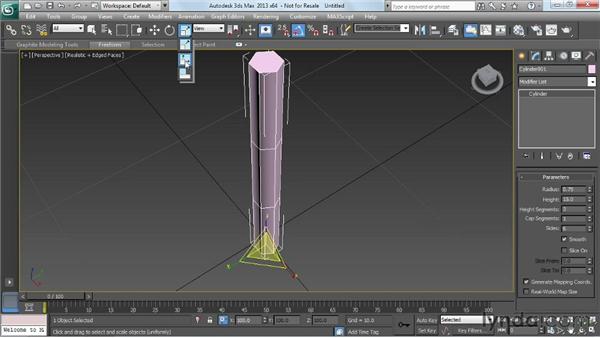 In this video I'll start to block out my sledgehammer. These kinds of tools show up all over the place in games; sledgehammers, crowbars and so forth, and we may be able to pick them up and interact with them. What counts really for us is the silhouette. Does it have that sledgehammer look, that large blunt head and fairly straight handle? We want to make sure this is different from a claw hammer, or a wooden mallet or something similar, that if we are making a sledgehammer it reads as a sledgehammer. I'll start out at Max with a cylinder.

I'm going to work in my Perspective View initially creating the sledgehammer standing straight up. It doesn't really matter which way it's facing as we can reorient it as we need. I'll choose Create and under Standard Primitives, there is my cylinders. I'll click and drag out a Cylinder. Then I'll jump to the Modifier panel, hit Z to Zoom Extents and adjust its parameters. I'm going to make the Radius on this 0.75 or three quarters of an inch and a Height of 15. I'm going to put my Height Segments at 3 and my Sides at 6.

Now you may look at this and say, hmm, that looks kind of chunky. But I'm going to employ some smoothing groups later, so it looks pretty well round unless we get close to the end and look at it. But I'm economizing on my polygon usage. Now I'm going to give this a little bit more contour, a little more curve. On my Scale tool, I'll flyout the scale and choose non-uniform. I'm going to scale this on the Y axis, so it becomes an oblong, that way it fits in the hand a little better. Then I'll right-click and convert this to an Editable Poly.

Sometimes what I'll do for modeling is actually start scaling sub-objects. I'll press 2, which takes me to the edge sub- object, and I'll double-click on the edge loop that runs around the middle. Now we'll take this and scale it on the X axis just a little bit to give this hammer a little taper in the handle. I'll do the same at the next edge loop up. Remember your edge loops run parallel around an object; edge rings travel around an object with the edges perpendicular to the selection.

I'll make sure I'm scaling on the right axis, going in on the Y just a little bit. So now my sledgehammer in the middle has a decent curve, ready for somebody to grip. Finally, I may go into the top of the head and scale this in, although our steel head will sit up here, so I'm going to leave it alone so it meets with a little bit of a flair. When we're making an object like this, we want to keep it as low poly as possible while maintaining silhouette. From the front, or from the side, our hammer needs to have that curve and the smoothing groups will help make it look round.

6/21/2012
Explore the world of modeling and texturing game props and assets in Autodesk 3ds Max. Author Adam Crespi demonstrates how to create both small and large props, from tools to shipping containers. The course begins with cloning and instancing objects for ease of modeling and unwrapping, and segues into multiple methods of unwrapping and painting texture by hand in Adobe Photoshop. Adam looks at various plug-ins that assist with normal map generation as well as sculpting in Mudbox, a digital sculpting application that can add realism and detail to your models. Finally, the course shows how to add lights to a scene and preview the objects in-game.

Note: A familiarity of basic modeling and unwrapping techniques in 3ds Max and a working knowledge of Photoshop will help you get the most out of this course.
Topics include: