Making wrinkles in the pants 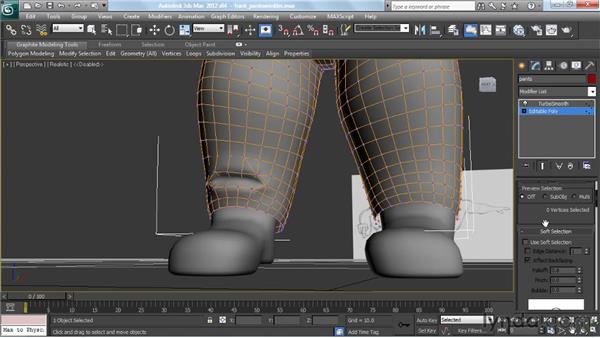 Join Ryan Kittleson for an in-depth discussion in this video Making wrinkles in the pants, part of Modeling a Character in 3ds Max.

Making wrinkles in clothing is a very unique challenge. It's a different kind of modeling from what we've done so far. It's also an artistic challenge that painters and sculptors have been struggling with since the caveman days. In digital art there's many ways to make clothing and wrinkles. Dynamic cloth effects is a common solution, but this being a modeling course and a cartoony character, let's find a modeling solution to the problem. Modeled wrinkles are still commonly used in video games, because it's hard to calculate dynamic cloth in real-time game engines.

The skills you learn here can help not only with modeling cloth, but also with all kinds organic irregular shapes. Our exercise file contains the basic pants as we made them in the last movie. Since wrinkles happen asymmetrically, let's delete the Symmetry modifier. Let me go in here and select the pants. And they have a Symmetry modifier on them, so I'll just get rid of that. I'm also going to add a TurboSmooth modifier, so I can what a smoothed version of the pants looks like while being able to work on a lower-density version of them.

I'll just turn on Isoline Display so it's easier to see what I'm doing. Go back to Editable Poly and turn on Final Result. A lot of times you can think of wrinkles as forming like mountain ranges and valleys. I'm going to use the Cut tool to define certain chunks of the pants as being valleys and other parts as being mountains. Then I can tweak vertices to push in the valleys and pull out the folds around them. So let's zoom in on the pants, and I'm going to go full screen with Alt+W. A common place for wrinkles to happen is around the pant's cuff.

Let's say that I want a fold to happen right around here. I'll just push in a little row of vertices. So I'll go into Vert mode, and I just have Ctrl held down so I can select multiple vertices. Now let's go down to the Edit Geometry section of this. Here, Edit Geometry. We want to turn on Normal because I want to push and pull these different vertices relative to the facing direction of the geometry. All right, let's hit W to go into Move mode and see what happens. So we can push in and out relative to the surface.

So I'm just going to push these in, and you can actually push them farther than you think they should be, because we're actually going to do a technique that makes them come back out again. So I want to push them in pretty far. Now let's go up to Grow. So I want to grow this selection, and now I want to push them the other way. You can always tweak it later if it's too far or not far enough. Now we're starting to get a valley surrounded by mountains. Now this is looking okay, but I think we could define the shape a little bit better. Notice how these corners are getting kind of soft and undefined.

We can reinforce the wrinkle shape by cutting some more edges here. So I'm going to get out of Vertex mode and go up to Graphite Modeling Tools and let's go to Edit > Cut. What I want to do is cut some diagonal edges that will help reinforce the shape of this wrinkle. So you want the Move tool here so that it forms this little X shape. If it's kind of like this shape, that means it's going to cut through an edge, but I actually want to cut starting at the vertex here.

So just cut from vertex to vertex. It kind of gives you a little preview of what the cut is going to be before you finish it. Cut from there to there. Now I'm going to right-click to lock that in, and let's do another cut from up here. Actually, there's a bug sometimes with Max where it accidentally cuts where it's not supposed to, so we're going to have to clean that up manually. So right-click and let's go back to Vertex mode and see what happened here.

Let's turn off TurboSmooth for now. So what did it is it accidentally created all these extra vertices, and they're causing some problems. I'm going to hit Z to zoom in on that. Yeah. Let's fix that up. Let's just go down to Target Weld, and let's make sure we can weld all these stray verts together. And let's turn TurboSmooth back on. Okay, that's looking a lot better. Let me zoom out and evaluate this.

Let's turn off Edged Faces so that we can see what's going on without those edges in the way. We'll also need to get out of Vertex mode. That's pretty nice. It's a little bit neat, however. Clothing and wrinkles tend to form a little bit more messy shapes. So we can go in and mess this up. I'm going to go into Editable Poly, go into Vertex mode. And you just can select individual vertices and turn on Soft Selection and just push things around a little bit. I'm going to drop the Falloff down a little bit more. So you can just move things around a bit.

I'm also going to the go down to Edit Geometry and set it to None, so that we can move in certain directions that aren't the normal facing direction of the polygons. When you like the result, go ahead and make another wrinkle. Folds in clothing tend to happen in patterns next to each other. I'll start making another one to the side of this one. I want to offset it little bit so that it's not right at the same level as this existing one. So I'll just come in here and maybe select this vertex.

And let's set it to Normal so that we're pulling and pushing according to the facing direction of the geometry. And also, I want to turn of Soft Selection again. I'm just Ctrl+Clicking a few more vertices here. And let's push these in. Again, like I did before, I'll just grow the selection a bit and pull it out. And let's get out of Vertex mode, and actually let's bring back Edged Faces.

I know it's a lot of going back and forth between a lot of things that you have to turn off and on. Let's go back to Editable Poly, and let's just cut some more angles here into this. It looks like the TurboSmooth might be conflicting with how we're viewing this, so I'm going to turn that off really quick so I can cut this without that getting in the way. Okay, and just right-click to lock that in.

The challenge with cloth folds is that you want to maintain a pattern while at the same time randomizing it enough so that it doesn't look artificial. You want to add variation to the size, placement, length, depth, and shape of all the folds. Also be sure to leave some parts of the clothing without any folds, or at least less folds than other parts. Be sure to examine a real-world reference to see the patterns and chaos in reality. I'm going to open up the other exercise file where I have gone through and completed all of these wrinkles.

Notice how I localized the wrinkles in specific places. Not only does it help it look more natural, it also adds to the stylization of the character. So for example, there's a lot of baggy wrinkles down here at the pants where they bunch up at the bottom of the cuff. Then there's less around the knees where pants tend to stretch and smooth out. There's one more step to do to the pants at this point. Right now, the pants are just one single polygon thin, but I want to give them a certain amount of thickness. One way to do that is by extruding the border edge inwards.

So let's go into the pants here and go to Editable Poly and select Border Edge, and I just want to select this Border Edge at the top. Let's turn on Edged Faces so we can see that more easily. And I'll go into Scale mode by hitting R, and I'll hold down Shift while I scale this. So I'm just scaling this new extrusion inwards, and this is going to add some thickness for the pants. Then I'll go into Move mode and do the same thing. I'm just going to Shift+Move downwards.

Let's go out of Border mode and turn on TurboSmooth to actually show the end result here. So now we've got some thickness to the top of the pants. Go ahead and repeat that same thing for the bottom of the pants as well. Select the border edge and Shift+Scale it in and then Shift+Move it up, just like we did up above. There is the foundation for the pants. This way of doing it is far from the only way, but it's a straightforward method that also works well for modeling all kinds of other things that are based on the shape of something else. Feel free to experiment with your own techniques for making wrinkles, as my way is not the only way.

8/30/2011
Modeling a Character in 3ds Max with Ryan Kittleson covers the process of designing and building a 3D human character that can be used for feature film, broadcast, and games. The course begins with an overview of the 3ds Max tools and techniques used in character modeling, and how human anatomy is represented using 3D geometry. Once this foundation is in place, the rest of the course goes step by step through the actual process used to model a simple human character from the ground up, including facial features, musculature, and details such as hair and clothing.
Topics include:

Video: Making wrinkles in the pants