Learning the basics of posing characters 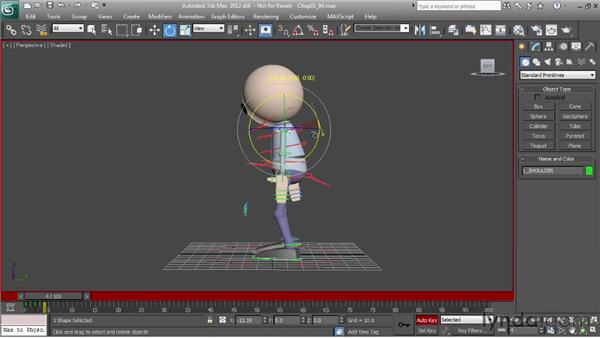 Join George Maestri for an in-depth discussion in this video Learning the basics of posing characters, part of 3ds Max: Character Animation.

Now let's go ahead and start posing our character. Now, when you pose a character, you want to understand the weight distribution of the character, and also the mood of the character; what story are we trying to tell with this character? Remember, animation really is about storytelling, so we want to make sure that we have a pose that supports the story. But let's just go ahead and do some simple poses, just so you get an idea as to the workflow of how to pose a character. Now, typically when you get a character from a rigger, it's going to be in this very, very neutral pose, with the arms straight out, and the legs very stiff.

And while that might not be a pose that you want to use in your animation, it is a very useful pose, because this is the neutral position of the character. Now, sometimes when you pose characters, you may do things like over-rotate an arm or wrist, and you may kind of get yourself into a position where you don't really know where the character is, so if you have this neutral position, you'll always have that to come back to. So one of the things I like to do when I first start posing characters is to just select everything while the character is in this neutral pose, and just hit a keyframe for that.

So once I do that, I know I have that neutral pose that I can always come back to. Now, I don't need to have this pose on the timeline. I can move it back into the negative frame. So if I wanted to, I could say, move this pose to, say, -1 or -2, and that way it's there if I want it, but I don't have to show it on the screen. But I'm going to keep this at Frame 0 here, and let's go ahead and start posing this character. Now, the first thing I want to do is I want to start working with these arms, so I'm going to make sure I have Auto Key turned on.

Then I'm going to select each arm, and just rotate it down to the character's side. And this is just very slightly more relaxed pose, but it also could be something that I can use. But again, you don't have a lot of action; you don't have a really strong line of action. It's very straight, very stiff; almost like the character is at attention, but we can still use this, as you'll see later, so I'm going to go ahead and keyframe that as well. Now let's go ahead and actually pose him into something that's a little bit more of a story type of pose.

We want to kind of get a little bit more of a mood to this character. So let's kind of just slouch him over. So, probably the first thing we want to do is just start working with the hips. Now remember, a lot of the tension in a character comes from the weight of the character moving down, and the legs supporting him. So we've got a lot of tension here. We've got the weight of the character coming down, and the legs supporting it. So this whole area right here is very critical to any pose.

So let's go ahead and start with the hips. First thing I want to do is just get a bit of a bend in that knee. So again, remember, we've got this weight pushing down from gravity, and then the legs are pushing back, so we want to get at least a little bit of a bend in the legs to kind of get a sense of that tension. When the character's legs are perfectly straight, it doesn't feel natural to the audience. So I'm going to go ahead and rotate this character back a little bit, and then let's just go ahead and kind of slump him over; rotate him forward.

So I'm going to go ahead and work with both of these spine joints here, and even maybe rotate his head forward just a little bit; kind of dip his head. And as you can see, even with that, we've got kind of a nice S-shaped line of action. So we're starting to get a bit of a line of action to this character. Now, we don't have to have his legs straight on like this. I can certainly rotate his toes in, for example. Again, he is kind of a shy guy, so maybe kind of rotate one foot in.

Now, if I push this leg out, it's going to affect the balance of the character as well. So, if I do that, I need to kind of re-center him, or maybe give a little bit of a rotation. Again, one of the things you want to check with poses is that you don't want your poses to be totally symmetrical. It's okay to have the character slightly on one side or the other. So even something like this, with one toe a little pointed in, will give it visual interest, and make it look more natural.

Now, if we look at him from the side, you'll see that by pushing those legs out, we've kind of changed the balance of this character. He is very front-heavy; he is almost about to tip over. So we need to kind of grab those hips, and adjust them back just a bit, and get him over his feet, so that way, he is not falling over. And then also, these arms will hang at the character's side. So I can either put them down vertically like this, but that's not as natural as maybe giving just, again, a nice little bend to those arms.

And as I do that, you can see I'm interpenetrating the legs, I'm just going to pull that out just a bit. Here we go! Okay. So that's a much more natural pose. Now, I think I've touched almost every part of the rig in this pose, but just to make sure, I want to go ahead and select all, and just do a keyframe, just to lock that in. So now we've gone from straight out and arms down, to a pose that actually has a bit of a story behind it, and we actually have a much stronger pose here.

Now, let's go ahead and do one more pose, and let's kind of do the opposite: let's make him a little more boastful; a little bit more assertive. Now, if I want, I can actually start to unrotate all of these parts, but that can be actually very time-consuming, and that's one reason why I created this pose here, is because that's actually a really good starting place for additional poses. So I'm going to again go to my Selection Set; select ALL.

That selects everything. You can see I have a keyframe, and all I have to do is just hold down the Shift Key, left-click on this, and drag it, and I can move all of those keyframes, and copy them further down the timeline. So now I've gone from this, to this, to this, and then I copied the keyframes at Frame 2, and so I'm back to this, so I don't have to worry about undoing this. This kind of puts me back to a neutral position, which is one reason why we like to hang on to these sorts of poses.

And now we've got kind of a pose here, and let's go ahead and move the feet out. Again, we're trying to get him a little more assertive. A lot of times, when characters are assertive, that means that they're taking up more space, almost like how an animal will kind of stretch out its arms, just to make itself look bigger when it attacks. So let's go ahead and rotate those arms out, and I want to be in Local mode for some of these rotations here, to make it a little bit easier.

So now I have a couple of different poses. I have my completely neutral pose, I have a pose that's neutral with the arms by the side, I have a pose that indicates a depressed or a sad mood, and then I have something that's a little bit more assertive. And as you can see, posing a character really just means getting that character into a pose that tells that story. Now remember, we usually start with the hips of the character, try and get that weight balance set up properly, and then we move up to the spine, and complete the pose.