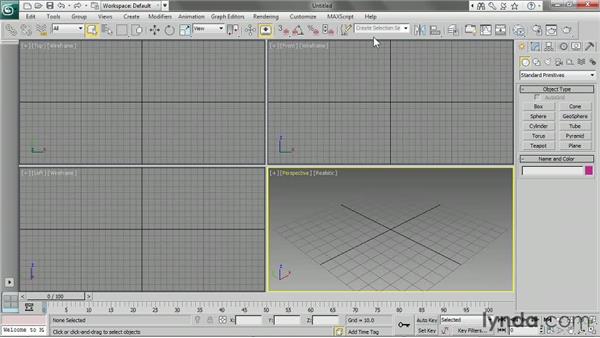 Let's take a quick tour of the essential components of the 3ds Max user interface. Previously I mentioned the Caption Bar up here, which is where you'll find the most common file commands, like Open and Save. There is also an Application menu here and that gives us access to some of the deeper file commands, like importing a foreign file format, for example from AutoCAD. The main menu in 3ds Max is kind of a limited menu, it doesn't have all of the commands that you will need.

A lot of these commands are actually redundant to other places in the interface, and there are in fact quite a number of commands that don't show up in the menus at all. This should be familiar to most of us and it's a cascading set of menus. Below the Menu Bar is something called the Main toolbar and this gives us commands such as moving objects. There are many toolbars in 3ds Max and most of them are hidden. If I right-click on an empty spot on the Main toolbar I'll get a list of all the possible toolbars.

For example, the Axis Constraints, that's the one that we'll be using later. The toolbars are dockable and I can just drag them around and drop them wherever I want, so it's quite convenient. I've got another one here on the left- hand side, it's called the Viewport Panel Layout toolbar and it's kind of actually empty, it's taking up a bit of space. So I'm going to right-click and hide the Viewport Layouts. I don't really need that. The main area of the interface is taken up by the so-called viewports and we've got a Perspective view, which is like a camera and then we've got Front, Top, and Left views which are called Orthographic views, and those are like engineering design documents. They are just 2D representations of objects.

On the right-hand side is something called the Command panel, and this is really the heart of the program, and the Command panel has sub-panels within it, we'll be looking at all these. The Command panel is also resizable, you can drag in order to make it larger, and it can be undocked as well. You can just right-click and choose Float. So this is helpful sometimes if you have two monitors. Go ahead and drag it back over there and it will dock back to the interface.

At the bottom of the interface we've got animation controls. We've got a Timeline that's listed in frames, there are bunch of buttons for doing things like creating animation, there are Transport Controls and also most importantly at the extreme lower right-hand corner are controls for the viewports themselves. So that you can navigate within your scenes. We'll be covering all of these in greater detail later in the course. For now that's just a quick introduction to the main components of the 3ds Max interface. What they're called, where they are, and how they work.

5/16/2012
The course covers Autodesk 3DS Max from the ground up, providing a thorough overview of this advanced 3D graphics and modeling package. Author Aaron F. Ross covers the 3ds Max interface and walks through common tasks such as modeling, texturing, lighting, animating, and rendering. The course is centered around real-world projects that provide designers practical examples to use with the lessons.
Topics include: