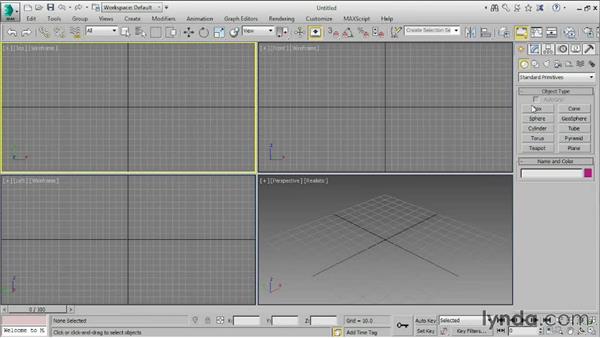 Let's take a quick tour of the 3ds Max interface and define the names of all these different elements on the screen. First, of course, we've got the main menu, and this is a pretty traditional menu. As you can see it's all text links. There is an alternate form of menus that you can use if you want. I personally don't use it because I think it's really slow to load and it's really quite confusing to look at, but if you're really into icons then you can enable the alternate menus. Go up where it says Work Space Default and click the down arrow and you can choose Default with Enhanced Menus.

And it'll take a moment to load up. And as you can see, we've got all kinds of stuff flashing on the screen and, you know, we may get panels that we don't want. But once we've done that now, if we go into these menus, you'll see that they have little icons next to them, and we can open them up and do all sorts of stuff with that. Again I don't really think it's necessary so I'm going to stick with just the old school menus. I'll go back up here to Work Space Default, switch that back out. Okay, and so it takes a moment for that to load so I'm just back with the default menus now.

The thing you need to know about the menus in 3ds Max is that they're not complete. In other words, there are many commands that are not found in the menus. And actually likewise, there are commands that are only found in the menus and not anywhere else, so it's not really very consistent. It's kind of a bit mixed up. But you will see that these menus include things like the ability to create objects, but additionally you can create objects from this panel over here, which is called the Command panel.

And that's really the heart of the program. And you'll see it has six sub-panels within it, and we'll be looking at all of these. We can create objects, modify them, and so on. There's a Tools and Utilities. So that's the Command panel. Additionally we have this row of icons up here. That's the main toolbar, and it's really essential. You really can't get along without the main toolbar because it has really important things on it like Move or Link to create parent-child relationships or connect objects to one another.

So without the main toolbar you really can't do much, so that's got to be basically on all the time. The main area of the interface is taken up by the viewports and these are the windows into your 3D world. Currently we've got a four-viewport layout but there are many different types of layouts. In this course we're really only going to use the four-viewport and single-viewport layout. Down in the lower right hand corner are some viewport controls. So for example, on the extreme lower right-hand corner, is the ability to maximize one of the viewports, so if I click on that button, the active viewport now fills the screen, so the top view is now maximized.

I can click that again and now that top view goes back in the upper left corner. So there are a bunch more controls here and we'll look at those later. But those are the viewpoint controls. And then additionally we've got sort of a hodgepodge of different stuff down here. We've got a help line that tells us, you know, what we can do. We've got some transform type-in controls here which will tell us for example where an object is, how it's rotated and so on. And we've got some animation controls here for creating key frames and also transport controls for navigating through the timeline.

So those are the main elements of the 3ds Max interface. There's a lot more. In fact, there are whole panels inside of panels, but that's an overview of the main 3ds Max UI.