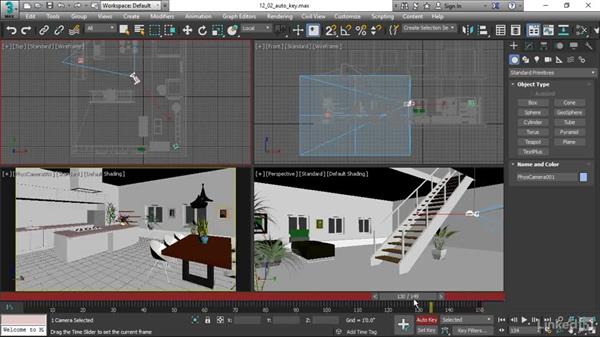 - [Voiceover] Let's create some simple keyframe animation. I want to dolly the camera forward, just do a simple walkthrough, make it move towards the kitchen there. I'll select that camera and use the Move tool, grab that, and to move it exactly forward in its own Z-axis I'll use the Local reference board in its system. Now we can just dolly that directly forward. Now we're going to create these keyframes using 3ds Max's Auto Key mode. And this is the original keyframe generation mode in 3ds Max and it's a little bit unorthodox.

What we want to do is enable Auto Key down here and now in this mode almost anything we do in the program is going to create animation. Even if I'm doing things like changing lights or material colors and so on, I'm going to be generating keyframes anywhere in the program at this point. That's great because it gives you the ability to, for example, animate colors and so on, really easily. However, you just need to be sure that you know when you're in Auto Key and when you're not.

It's a really common mistake, everyone's made it, including me. You leave the Auto Key on, you don't really realize and then you start moving stuff around and you're creating all sorts of animation you never wanted. Okay, so let's create that little dolly move. One of the quirks of Auto Key is that if you have no keyframes yet in your timeline then if you just move the object around and you're parked on frame zero, nothing's going to happen. But if you're not on frame zero then what will happen is you will get a keyframe on frame zero where the object was before you moved it and then you will get a second keyframe for where the object is on the current frame.

It is very weird but let's take a look at it, okay, so I'm going to scroll down to the end of the animation, frame 150 and then simply dolly forward into the scene. And then when I get where I want, just release the mouse, and now I see a little red marker down here and that's a keyframe at frame 150. And if we scrub through here we can see that we are actually getting animation. If we look over on the left side, though, for some reason we're not seeing a keyframe and that's, again, because that first keyframe is always built at frame zero but we previously set our Time Configuration to start on frame one.

We can fix this really easily. Let's go back into Time Configuration, click on that, and then set the Start frame to zero, click OK, and now we've got the visible red tick there that's our keyframe and it's at frame zero. If I wanted it to be at frame one I can move that around really easily. I don't have to be in any particular tool to do that and I don't have to be in the Move tool or anything because the timeline has its own selection and transformation rules, all I have to do is just hover my mouse over that little red keyframe and then drag it to move it.

You can see at the extreme lower left of the screen there it says, "Moving keys," this is telling me where I'm moving it from, and where I'm moving it to, and what the distance is in frames. I'm just going to move that over to frame one and drop it and we're good now and I can switch my Time Configuration back to start on frame one, click OK. All right, let's admire what we've done. We'll turn off Auto Key, select the physical camera, and maximize it with Alt + W, and maybe turn the grid off, we don't really need to see that, press the G key to disable the grid, and then press Play, and we're seeing the effect of our five seconds of animation at 30 frames per second.

Notice, by the way, that we're getting a default slow out, slow in. The movement is speeding up as it comes out of its initial position and it's slowing down as it approaches its final resting position. We can, of course, edit that later. We're just getting a default slow in, slow out or ease in, ease out. We can change that later if we want using the Track View Curve Editor. We'll take a look at that later in the course.