Creating the base flaky structure 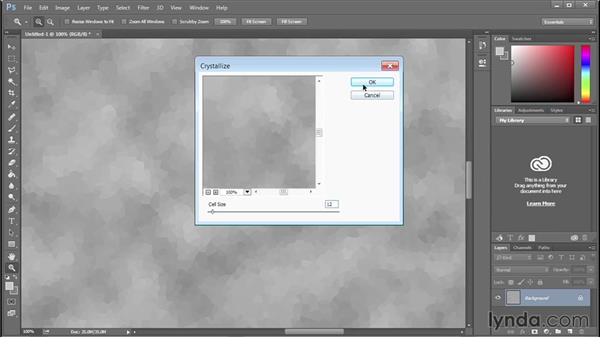 - Slate is a versatile building material and we use it all over the place. In floors, on roofs, we use it on tabletops and even tombstones. With slate, what we want to think about is the flaky, crystallized pattern, after all it is a sedimentary rock made of many, many layers that have been squeezed together. I'll go look at some reference for slate and then come back and make a big base slate here in Photoshop. In a quick search for slate, we can find imagery for slate roofs.

We can find slate flooring and even just general knowledge about it. As the Wikipedia entry says, "It's a fine-grained, foliated, "homogeneous metamorphic rock." It's a sedimentary rock or derived from which means it's got many, many layers in it and a fine grain. It's almost sandy when you touch it. When we take slate then, we can cut large blocks and split them very, very thin. We can do this with special hammers or cut by machine and it accepts a nice polish.

What we can see with slate in this floor particularly in all the different floors that are polished is that even with what we think is a flat slate, there's still a variation in it. And within the slates themselves there's enormous variation in color and in pattern. We blend this together for an overall look where we're making our base or rather bases. We need to keep in mind the variation within slate. When we look at slate roofs we've got a similar variation. The slates look a little bit thicker or maybe we're just seeing the edges.

They also feel a little bit rougher on the edges whereas the floor tiles were cut smooth. Our slates here have a good variation as well, both in texture and in color. So what we think is just a gray roof may actually be green and purple and gray, and a couple of different shades of each of that to compose our overall look. We'll jump into Photoshop then and start making a large base of slate that we can cut our tiles from. Here in Photoshop I'll make a new document pressing control N.

And in the new document dialog, I'll put in a width and height of let's say 5,000 square. I'm using an RGB documented eight-bit color and right now my background is whatever I had it set to last. For this I'll be using the color profile of SRGB. If you have a color profile you're working to such as Rec. 709, put it in at this point. Otherwise, you can convert later and make sure you calibrate your colors as needed. I'm also working in square pixels and I'll click okay to start this document.

Here is my gray, large document to begin. And now I'm going to make some slate color. What I'll do for slate is start out with gray in gray and I'm going to make it even slight and then come back and colorize. First, I'll click on my foreground color and I'll put in a nice medium light gray. We'll put the brightness roughly around 70. Then I'll click on the background color and set the brightness loosely around 40. So we've got light gray and dark gray, not black and white.

Now we'll run some clouds in choosing Filter, Render and Clouds. Clouds are a great base for starting a texture but should never be used as a final texture as it's very obvious that they are clouds. In this case though they give us a nice phasing between light and dark. And now I'll put in that crystalline structure in slate. I'll choose Filter, Pixelate and Crystallize. I'll crystallize at a cell size of 25 so I get large chips and click okay. Now, I'll downsize this pressing control alt I or Image and Image Size, and I'll bring this down to a width of let's say 3,500 on the side.

An uneven proportion here let's us blend the colors a little bit better. And I'll choose from my resample mode, nearest neighbor to preserve hard edges in my re-sampling. So I'm forcing Photoshop to make some new colors but preserving a lot of that crystal structure. I'll click okay and in this downsized document, we zoom in and we can see pretty much chips still in it but occasionally a little bit of fuzz. Now I'll crystallize again choosing Filter, Pixelate and Crystallize.

I'll crystallize again at an odd measurement. Let's say a cell size of 19. This way I'm forcing it to crystallize at a percentage not half and not even of my original making up new crystalline structures. I'll click okay and run it one more time at another reduction. Choosing Filter, Pixelate and Crystallize again. Now I'll run at a cell size of lets say 12 and click okay. At any point in the crystallization you can press control F or Filter and pick the top one, in this case again, crystallize.

This simply crystallizes one more time and adds an even flakier structure to it. Now, I'll reduce once more choosing Filter, Pixelate and Crystallize. Here in Crystallize I'll put in a cell size of seven and click okay. Now what I've really got is that fractured edge structure in those perceptible layers of slate. If you'd like to go one step further choosing Filter, Pixelate and Crystallize one more time, you can and reduce the cell size to four.

Now I've definitely got a fractured structure. We definitely got some layers going on and that color variation through. For uniform color slate what we can do is just colorize this as is pressing control U to go Hue Saturation and checking colorize. I'm going to make a gray green slate for example. Swing that hue into the green range pulling out the saturation so it's just barely a green and backing off lightness a bit to really dim it down.

I'll click okay and zoom out to see how it looks. From afar we can see our cloud pattern still. But when we zoom in, we definitely get a flaky slate-like appearance. What I'll do in this gray green slate is just alter the color a bit choosing Image and Adjustments, Replace Color. I'll eyedropper, let's say one of the middle colors and see what it gives me in that selection graph. In this case there's too much ringing going on, too many loops.

So I'll try again in a darker color and now we've got more defined areas in it. What I'm going to do in here is just back off the lightness a bit to darken this and desaturate so it reads as more gray amidst the green. You've got some freedom to adjust these as needed but what we're going for here is a little bit of deeper color within that slate. I'll click okay and zoom out to check it out. This is better because what I've gotten here are some dark areas but still some variation within, and then my overall lighter slate.

There's another variant to this where we can make more of a blended color where each slate has more colors going through it. I'm going to make a new document pressing control N and I'll start this one out again at 5,000 square. In this case, I'm going to run my clouds based on the colors I want in my slate. Let's say for example that I want to start out with almost a warm tone like a rust. I'll bring up that hue and choose a nice rusty color and then, I'll pick a corresponding color for the background.

For this slate I'm going to introduce in a bit of a gold bringing up the brightness and backing off the saturation so it's got kind of a bronzy tan going. Now I'll run my clouds choosing Filter, Render and Clouds. We get on this as you'd expect rust and bronze in there. If you'd like you can always hit X to swap colors and go to Cloud again. Now what I'm going to do is run through crystallize and show what it looks like when I'm done. I've run my colored slate now through my same crystallization.

And we can see I've got some really nice fracturing within that color, some light and dark areas. Now I'm going to adjust the color. Choosing image, adjustments and replace color again. What I'll do is pull up the fuzziness a little bit and eyedropper let's say one of the deep red areas. I'll bring the fuzziness maybe a little bit towards 20, and then swing the hue around and find something that looks good. What I'm going to do is introduce in a little bit more green but then back off the color.

So now in here instead of deep rust I've got some gray showing up and I'll pull back the lightness making almost an iron spot in the slate. I'll click okay and I'm really getting a slate-like look where in this slate I've got rust and the tan and that iron spot color. When you're making slate then think not only of one slate but many. We want to have in our slate then or rather our slates, two bases that we can cut slates out of and mix the colors together.

Making it several times in different documents allows us the flexibility to start out with different clouds, perform different crystallizations and replace different colors to make a range of slate that then we can blend for an overall heterogeneous look in our tiles.

11/6/2014
Slate is a popular design choice for modern flooring and roofs, but getting an accurate slate texture out of the box for your models can be hard. With this installment of Creating Textures, you can build a custom slate texture in Photoshop and put it to work in the 3D modeling program of your choice. Adam Crespi begins the course by creating the base structure, and then layering in the color variation that occurs naturally in slate. He then cuts out roof and floor tiles to take into 3ds Max. There he links the texture to materials and adds the organic rough edges that gives slate its distinctive look.

Combine this technique with the wood and metal cladding courses for all your interior and exterior modeling needs!

Video: Creating the base flaky structure