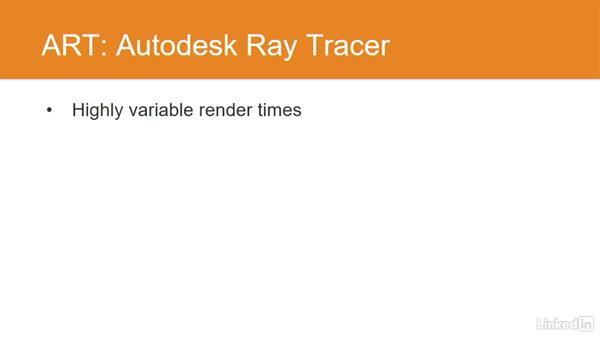 - [Voiceover] In our final chapter, we'll look at rendering in 3ds Max, and we'll talk about the different options for renderers. First, I just wanna show you this is a version of the loft apartment, it's got lots of lights in it, and all these cool props have been XRef'ed in. And I've rendered some samples from different camera angles with different lighting setups. Let's take a look at those. These were all done with the ART, Autodesk Ray Tracer renderer, and because of that they look pretty good.

It's a physically accurate renderer that's pretty low maintenance, I didn't have to do a lot to setup these scenes. However, that comes at the cost of render time. Because of the complexity of these scenes, they took many hours to render. Some of them took up to eight hours to render a single frame. Just be aware that that's what you have to work with, with ART currently. Let's look at our options for renderers in a stock installation of 3ds Max.

We've got the Scanline renderer, the Quicksilver hardware renderer, ART, or Autodesk Ray Tracer, and two NVIDIA plugins, iRay and Mental Ray. The Scanline renderer is the original renderer that came with 3ds Max when version one came out. And it's pretty fast, compared to something like Mental Ray or ART. However, it's not physically accurate. You can't expect to get effects like light bouncing off of surfaces to illuminate nearby surfaces.

It does that because it uses the GPU, or the video hardware, in order to calculate the images. It's actually the same technology as the engine that displays the viewports, which is known as Nitrous. Nitrous is the viewport version of the hardware renderer, and Quicksilver is the offline version that is able to save out files. Because it uses the GPU video hardware, the quality that you get is going to be highly dependent upon the quality of your hardware.

If you've got a really good video card, then you'll have better results with Quicksilver. And because of all of that, Quicksilver is really most suited to draft quality or stylized renders. ART, or Autodesk Ray Tracer, has highly variable render times. As I mentioned, they can be very, very long render times. But if you've got a simple scene, like a single subject, then it can render pretty quickly. It is physically accurate. If you drop a light into a scene and render it with ART, what you see in that rendering is exactly what you would see in the real world.

And that's a plus and a minus because, since ART is absolutely physically accurate, you cannot achieve any result that is not physically possible. In other words, if you can't do it in the real world, then you can't do it in ART. So for example, you can't turn off shadows, and you can't exclude lights from objects. Because of all of this, ART is highly suited to photorealistic renders, like we saw, and really only stills, because the render times are too long for animation.

NVIDIA has two plugins for 3ds Max. The first is iRay. It's very similar to ART, in as much as it's physically accurate. However, the difference is that iRay can use the CPU, that is the main processor in your computer, it can use the GPU, or your video hardware, or both. And it does it in a way that's different to the Quicksilver hardware renderer. iRay uses something called general purpose GPU, and that means that it can use your video card to calculate arbitrary code.

That means that it's not limited to the acceleration that your video card provides, to for example, draw polygons. General purpose GPU rendering means that we can render really any effect, and we're using the video card in order to do those calculations. And once again, if you have a really good video card with lots of memory, you'll have better results. The down side to iRay is that it requires certain materials. It really only works with the Mental Ray Arch&Design, or the Autodesk materials, which are in fact built upon Arch&Design.

If you use a standard material, for example, it won't render correctly in iRay. Finally, we come to NVIDIA Mental Ray, and it's by far the most versatile of all of these renderers. You can achieve very realistic effects, and you can also achieve very stylized effects using Mental Ray. The down side to Mental Ray however, is that you have to invest a lot of time in setting it up. With ART, you can just drop your lights in there and then press render, and it's kind of a set it and forget it situation.

But with Mental Ray, you'll probably have to do a lot more work to get your rendering to look good. Because Mental Ray is the most versatile of the renderers, it's suitable really for all applications, rendering still or animated sequences. That's an overview of the five stock renderers available in 3ds Max 2017.