Animating a walk: the feet 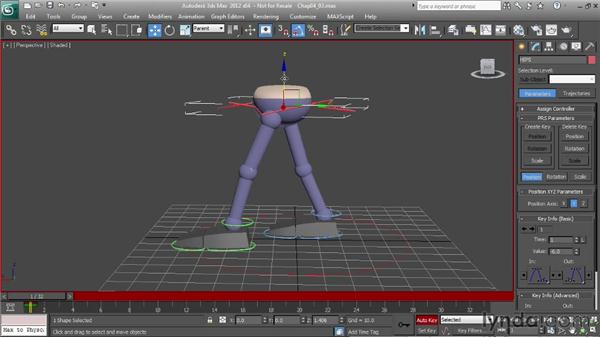 Join George Maestri for an in-depth discussion in this video Animating a walk: the feet, part of 3ds Max: Character Animation.

Once we have our basic character set up, we can actually start animating the walk. Now, in this video, we're just going to block out the footsteps, as well as the hip motion. Now, before we get started, I want to make sure I turn on Angle Snap, so when I rotate the hips, I'm rotating them at even integral numbers. And then I'm going to change my coordinate system to Parent. Now, I also want to keep the Motion panel up, and that will allow me to see exact values of each key as I animate the character.

In other words, I don't want to deal with decimal points. So if I click on the left foot -- in this case, we're going to look at the Position Y key -- you'll notice that the value of this key is 19.641. Well, it makes it very hard to animate when you've got a lot of decimal points floating around, so I'm just going to go ahead and round this up to 20, and now that gives me a nice even number as a starting point for that foot. I'm going to do the same for the right foot. Select that, again, the value is the same, so I'm just going to go ahead and type in 20, and then select the hips, and you'll see that right now it's at 13.6.

I'm going to ahead and round that up to 14. So now that we have this, let's go ahead and start animating our walk. So the first thing we want to do is decide upon the character of the walk. Is the character going to take small, tiny steps, large steps, or something in between? Well for this walk, we're going to do something in between, and I'm just going to position each foot slightly ahead of the opposite foot. So let's go ahead and start with the left foot.

I'm going to select that, and go into Selected Move mode here, and then just move this forward, and if you notice here, we're moving it negative Y direction. So we're going to move it negative Y, somewhere around -40. Now, if you notice, that's just ahead of the opposite foot. In the left foot's motion panel, I have a key value for the Y position of -20, and change.

Now, I want this to be on an integer boundary, so I'm just going to go ahead and delete everything behind the decimal point, and hit Enter, and make it exactly -20. Now remember, we started at +20, and we went 40 units in the negative Y direction, which gives you -20; 20 minus 40 is -20. So that puts the foot exactly in front of the opposite foot. But as you can see, the foot is off the ground, and the character is still not positioned, because we need to move the hips.

So I'm going to go ahead and select the hips, and we moved the foot forward -40. I'm going to move the hips forward half that. So I'm going to move forward -20. Now remember, the Y value of that hip should be at 14. So moving it forward -20 should put it somewhere around -6. So again, I have -6 here. I'm just going to delete what's after the decimal point, and just keep it at -6. So now we've got the hips positioned between the feet, but the hips are a little bit too high, so we can certainly move those down.

But also, the hips need to rotate back and forth. Remember, when the left foot is forward, the left hip is forward, so we need to do a rotate. So I'm going to go ahead into Rotate mode, and make sure Snap is turned on, because, just to make it easy. You can see how it jumps in 5 degree increments. So, we're going to rotate it -15, so it matches the left foot. So now we should have the basic pose. Now, the one thing I'm noticing here is the hips are a little too low. So again, we can move these either down or up. So I'm going to go back into Move mode, and just move those hips up, not so that their legs are overextended, but just so that they have a nice natural bend.

And once we do that, we have our first pose. Now, before we animate our next pose, I want to make sure that these two controllers here, which are knee controllers, are ahead of the knees. So if they move behind the knees, for example, you can see how the legs snap to look at those objects. So I want to make sure that these are well ahead of the characters, so that the knees are always pointing forward. Okay, so now that we have that, let's go ahead to the next step, and that will be the right foot.

But before we do that, we have to move our time slider forward. Remember, this walk is 16 frames per step. So 16 plus Frame 1 equals 17, and now we're going to take the right foot, and move that forward. Now remember, we moved the left foot 40 units to get it into this position, so we're going to have to move the right foot twice that. We're going to move it -40. You can see that right here, and that gets it even with the other foot, and then another -40 for -80 puts it right in front of the opposite foot. And again, we have the same thing happening here on the right foot's motion panel.

You'll see that under the Y Position, Key Info, we have -60. Remember, we started 20, minus 80, -60, and let's go ahead and just round that off. We can do the same for the hips. Again, I want to make sure that we're moving in Parent mode. If we were in Local mode, notice how, because the hips are rotated, you would be moving them out of square. So I want to make sure I'm in Parent mode, and that puts it right on the Y-axis, so we can move it forward. So I'm going to go ahead and select that.

Remember we're at -6, so again, plus 40 should be -46. So somewhere in that range, right there, and this value here, again, in the Motion panel, the Y value should be exactly -46. So I'm going to go ahead and delete what's behind the decimal point. Now, if we notice, you'll see that the hips are rotated in the wrong direction. They were rotated for the left foot. Now we have to rotate them for the right foot. So I'm going to go into Select and Rotate.

We need to take off 15, plus another 15, for total of 30, to rotate them in the opposite direction. So that should be a good first step. So there we go. So now we just have that foot sliding from one position to the other, but you can already start to see the character of that walk. Now I'm going to go ahead and select the left foot, and I want to make sure I have a keyframe for that. I can just go ahead and click on Set Key to make sure I have that, and now we're going to do the final step.

So we get that, and so the actual value here in the Motion panel, the actual value of the key will be -46 minus 40, which would be -86. And again, I need to unwind that rotation, so I'm going to go ahead and move that -30 degrees, and we should have it. So now I've got right foot, left foot. So that should pretty much do it. If I look at my right foot here, though, I don't have a final keyframe there, so I'm going to go ahead and select that, and make sure I have a keyframe at 33 as well.

So that should be at least the basic blocking of our walk. So let's go ahead and play this. As you can see, we've got a pretty good motion. We've got the hips rotating, and we've got the feet moving. That's really all we need for this first pass. Now, in the next video, we're going to go through, and refine this, and do additional passes to lift the feet off the ground, and finalizing this portion of the walk.

Video: Animating a walk: the feet